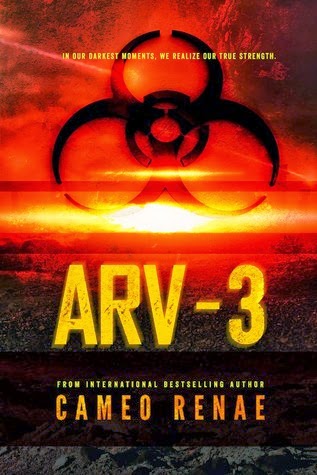 A nuclear fallout wiped out every living thing on the planet, except for a few thousand of us who took shelter in underground bunkers across the globe. Now, after thirteen long years, we were finally able to return to the topside to begin to rebuild.
We thought we were alone. We were never more wrong.
Before the fallout, scientists had worked on creating an anti-radiation vaccine (ARV). The first two attempts failed, but despite the incomplete tests and results, the government approved and distributed the third serum to the masses in an effort to aid those who had no shelter.
It worked, keeping those who remained on the topside alive, but it also altered and mutated them. This new and infectious threat had completely outnumbered us. Now, we not only had to rebuild our planet. We would have to fight for it.
My name is Abigail Park. I’m seventeen, and this is my story.

ARV-3 follows Abigail Park and her hive mates as they leave their home of 13 years and journey to the safe zone that is set up for all the hives. Before they set out the learn that those who survived the nuclear fallout have changed into these zombie like creatures that will make their journey even harder. The haven they thought they were going to isn't quite what they expected either.

I really liked Abigail. She was born before the fallout but grew up in the hive with her family and friends. She is in peak physical shape, she has trained in weaponry, she knows how to take care of herself and she is very personable. She is wise beyond her years but still has some of those innocent moments. Right before her group sets out her and her best friend realize their attraction for each other is mutual and decide to give their relationship the go as well so there is a nice romance behind the story as well.

The author did a fantastic job of building her world and story. We get lots of information without it all being dumped on us and making you overwhelmed. The Arvies are well described and depicted. The action is intense and keeps you glued to the pages. I wasn't overly shocked by what the group found when they got the the safe zone but that is because I knew it wouldn't be all butterflies and rainbows. Its a Dystopian after all. I enjoyed many of the characters that were introduced and was a little shocked at their willingness or unwillingness to help at certain times in the book.

I have high hopes for the next book in the series. I have what I would love to happen planned out in my head and I know I am going to get so angry when it doesn't go that way but I will read it just the same in hopes that it does.