Guest Post & Giveaway: Mark of the Sylph by Rosalie Lario

UFI welcomes Rosalie Lario Author of The Demons of Infernum series. Thanks for Joining us!!


Why I Love Demon Heroes by Rosalie Lario


I have a confession to make. I’ve been fascinated with the paranormal ever since I can remember. It started with the first story I recall reading and loving: Bunnicula. I couldn’t get enough of the vegetable-juice-sucking bunny. He was shrouded in danger and mystery, and I was hooked!


Growing up, tales of vampires, werewolves, and witches thrilled me almost as much as they terrified me. I remember watching reruns of The Munsters for hours, along with some truly scary movies (for a kid), like The Lost Boys and Silver Bullet, and other not-so-scary ones, like The Witches of Eastwick. Even better were the less traditional horror baddies like mummies, trolls, or goblin kings. (The Mummy, Willow or Labyrinth, anyone?) There was something so fun about being able to pretend that these beings actually existed.


When I discovered romance, a whole new love was born. Paranormal creatures as heroes instead of villains? Hell, yeah! There’s something about taking a tortured supernatural hero and giving him his happily ever after that I just can’t resist. Maybe it’s the idea that every being needs love...


Demon heroes are amongst my favorites. Take a being normally considered evil and give him more layers, and I’m totally there. Larissa Ione does this perfectly in her Demonica series, and I also enjoy the Immortals After Dark by Kresley Cole.


My fascination with demons heroes is what led me to create the Demons of Infernum series. Except the demons in my world aren’t evil creatures from Hell, but a race of beings from another dimension. As with humans, there are all kinds of demons: some good, some bad…and some in between.


When Maya, the heroine in Mark of the Sylph (Demons of Infernum, #2), first meets half-demon Taeg, she tries to kill him. She’s got a good reason, though. Maya is an Immune, a rare human who can see through the glamours other species invoke. When she was a child, she witnessed demons murder her family. So, yeah…she’s a little jaded when it comes to demons.


Maya has grown up thinking all demons are evil. Taeg is just another bad guy who needs to be killed. Imagine her surprise when he turns out to be nothing like she imagined!


I had a great time creating my sarcastic, wise-cracking demon with a heart of gold. Not only does Taeg have a sense of humor (as evidenced by the smart-aleck T-shirts he loves to wear), but he’ll do absolutely anything to protects those he loves.
Mark of the Sylph, Book 2 of the Demons of Infernum series, Now Available!

Formally trained as a corporate and real estate lawyer, I practiced law for 5 years before finally admitting to myself that negotiating contracts wasn’t nearly as fun as dreaming up stories. As an avid reader of romances and supernatural stories, I knew I wanted to write urban fantasy and paranormal romance.  Tales of vampires, demons, and other supernatural beings ensued.

When not writing, I enjoy spending time with my husband and son in our home state of Florida, as well as searching out things that go bump in the night. I still haven’t found any, but I’m keeping my fingers crossed.

If I ever do find evidence of the supernatural, it remains to be seen whether I’ll jump around in excitement, or run screaming in terror (but I’m betting on the latter)! 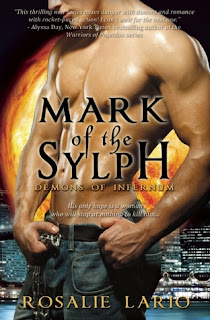 Mark of the Sylph
Demons of Infernum #2


Half-demon Taeg is desperate to free his pregnant sister-in-law, who is spellbound to an indestructible book that will create an army of the undead. He is convinced that an ancient sword can destroy the book and the spell forever, but this relic has been hidden for a millennia by a powerful glamour. The clock begins to run out on his search when an old rival goes after the book and Taeg’s family in his quest for revenge.

Librarian Maya Flores has a secret: she’s immune to magic and is well aware of the supernatural beings prowling the streets of New York City. Haunted by a brutal demon attack that took her family, she is on a one-woman mission to destroy the evil demons who did it—and any others who get in her way.
Maya is Taeg’s best hope for uncovering the sword.
Unfortunately, she wants nothing more than to kill him. As he fights for her trust and to save his family, she is forced to face the truth that not all demons are evil. And the worst part? She might be falling in love with one, too.