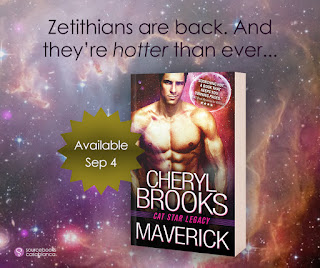 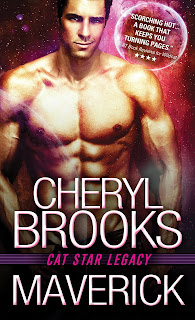 
Zetithians are back. And they’re hotter than ever…
Having the Zetithian feline gene gives Larry Tshevnoe awesome beauty, fearsome strength, sensuality and sexual prowess unmatched by any other males in the universe. But it can make the quest for true love...complicated.

Enter childhood friend and fellow Zetithian Althea Banadänsk. Her empathic powers make her the only one who can show Larry what he truly desires, and she’ll do anything to help…even if that means hiding her desperate craving for him.

But when a distress call sends them off course—and into danger—they find more than their hearts are at stake. Now it’s up to them to become the champions of truth and justice throughout the galaxy…or risk losing it all.

Cheryl Brooks is a former critical care nurse turned romance writer. Her Cat Star Chronicles series includes Slave, Warrior, Rogue, Outcast, Fugitive, Hero, Virgin, Stud, Wildcat, and Rebel. Her Cowboy Heaven series includes the Cowboy Delight novella and the Cowboy Heaven novel. Her self-published works include Sex Love and a Purple Bikini, Midnight in Reno, and the Unlikely Lovers series, which includes Unbridled, Uninhibited, Undeniable, and Unrivaled. As a member of the Sextet, she has also published several erotic novellas with Siren/Bookstrand. She is a member of RWA and IRWA and lives with her husband, two sons, two horses, four cats, and one dog in rural Indiana.