UFI welcomes Author Holly Jennings. Thanks for Joining us!!


I'm super competitive -- with myself, not other people. I think it doesn't come across very much because I'm quiet and introverted, so I'm not very vocal about my motivations. However, I love a good challenge, especially when it stretches my current boundaries.


I enjoy playing video games, but that might be pretty obvious given the content of my novel. I tend to prefer AAA games with open worlds, but have also enjoyed different kinds of games, like simulation games or MMOs. Besides games, I enjoy reading, working on my house, and spending time with family.


My favorite part is about writing is creating worlds I wish I could live in. It's like bringing your fantasies to life, in a way.


I tend to write at night and in silence (most writers I talk to write with music playing). But these are just preferences of mine, and not routines that need to be followed. I can easily write during the day or with noise in the background.


Simon R. Green's Nightside series was my first experience with the Urban Fantasy genre. Before that, I'd only read high fantasy and science-fiction. So, it will always be special to me. Besides that, I really enjoy the Dresden Files, and the first few novels of the Anita Blake series.


How would you pitch ARENA to someone who has not heard of it before?


In a future where advanced virtual reality has turned gamers into the ultimate athlete, Kali Ling is poised to become the first female captain of the RAGE tournaments – the Virtual Gaming League's most brutal fighting game. But when her teammate overdoses after a particularly grueling matchup, she begins to question what's really important: her career or her friends.


Can you tell us a little bit about the world that ARENA is set in?


Arena is set in a futuristic Los Angeles in the year 2054.Virtual Reality has become the dominate technology in the world and professional gamers compete in live tournaments for fame, glory, and riches.


Do you have a favorite scene in ARENA?


I can't get into details because of spoilers, but I really enjoy the change the main character goes through in the book and the final scenes are where we see the culmination of this change. These would have to be my favorites.


My favorite character to write about is Christopher Rush. He's from a fantasy series I'm developing, currently unpublished. He never takes life too seriously, and adds a heavy dose of comic relief to the script. It's fun to have characters that make me laugh, and he's the one that does it the most.


The main character in Arena, Kali Ling, has been my most difficult character to date. She's deeply flawed but deeply passionate, and goes through a substantial change over the course of the book. While difficult, she's definitely helped me to become a stronger writer.


Currently, I'm working on the sequel of ARENA. Besides Arena 2, I have two other series I'm developing. One is the noir fantasy series that I mentioned earlier and is full of mystery, supernatural politics, and a heavy dose of bromance. It's very different from what I usually write, but I love it. Plus, I find working on a variety of stories helps me to combat writer's block. The other series is a fairly new idea I had about a biological-engineered young woman in a solar-powered future. It's most likely to be my follow up to Arena, because it should appeal to the same group of readers.
__________________________________ 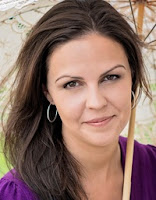 Holly Jennings is a self-proclaimed nerd and lover of all things geeky and weird. As the firstborn to a sports enthusiast, it was soon discovered that the only games she'd ever learn to master involved consoles and controllers. Her childhood was spent crushing virtual foes, racing on simulated tracks, and rescuing digital princesses. As a young adult, she fell in love with English class, speculative novels, and comic books, which inspired her to create stories of her own. Eventually, her passions converged and she started writing about the future of video games.

She lives in Canada. 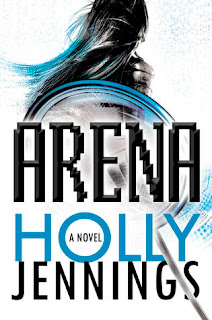 
A fast-paced and gripping near-future science fiction debut about the gritty world of competitive gaming...

Every week, Kali Ling fights to the death on national TV.
She’s died hundreds of times. And it never gets easier...

The RAGE tournaments—the Virtual Gaming League’s elite competition where the best gamers in the world compete in a no-holds-barred fight to the digital death. Every bloody kill is broadcast to millions. Every player is a modern gladiator—leading a life of ultimate fame, responsible only for entertaining the masses.

And though their weapons and armor are digital, the pain is real.

Chosen to be the first female captain in RAGE tournament history, Kali Ling is at the top of the world—until one of her teammates overdoses. Now, she must confront the truth about the tournament. Because it is much more than a game—and even in the real world, not everything is as it seems.

The VGL hides dark secrets. And the only way to change the rules is to fight from the inside...