UFI welcomes Author Lorelei Bell. Thanks for Joining us!!
What can you tell my readers about yourself that they might not know from looking on your bio or reading in another interview?


I'm not sure if people know that I've tried to get published for decades, failing all that time. Plus I am dyslexic.
What do you enjoy doing on your down time?
If I even have time, you mean? I read whenever I can. I enjoy walks either alone or with my husband. We love to travel out west. But mostly I think about my books—which ever one I'm working on. And I do a lot of work on self-promotion/blogging.
What is your Favorite part of writing?
I love it when the words flow, or when I've figured out something that was particularly difficult in the plot that was not there before. You know, the WOW factor.
Do you have any certain routines you must follow as you write?
Not really. I'm a panster, and when I have a scene in my head, I write it. Sometimes when I have something that isn't coming, I go to the next scene. I don't believe in writer's block. The only thing that blocks me is having to go to work and be there for several hours—and even then I may have an idea and have to jot it down.
What are some of your Favorite books or Authors in the Urban Fantasy/ Paranormal Genres?
Oh, I love Kim Harrison. I also like Charlaine Harris the Dead series. I don't care for the TV show that came from it, however. They changed too much of it.
How would you pitch Vampire Ascending to someone who has not heard of it before?
It isn't your typical kick-ass, or romanticized vampire story. It's imbued with lots of action, mystery, romance, danger and you never know what will happen next.
Can you tell us a little bit about the world that Vampire Ascending is set in?
We call it a “closed world”--which means normal humans don't know that vampires exist, and it takes place in the modern world. The area is in the Chicago and rural areas of northern Illinois.
Do you have a favorite scene in Vampire Ascending?
I like when she's in the restaurant with Tremayne and he brings in his harem to take their blood while she nervously watches.
Which character was your favorite to write about? What about the hardest to write about?
I love writing about Sabrina. She is smart, but a bit quirky because of the fact she is a touch clairvoyant, she is not very worldly, and has never held down a regular job because she can go into a vision at the drop of a hat. But she isn't a push-over with the vampires. She was a challenge because she had some aspects of myself in her, but I had to make her different. I also had to write about the ultimate male/vampire, Bjorn Tremayne. Toby Hunt was another character who I had to get into his head and know why he was doing what he did.
What Other Projects can we look forward to reading from you?
Vampire's Trill, the sequel will be out this November.
__________________________________ 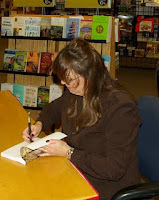 Born and still stuck in boring Northern Illinois, I've grappled with my dyslexia all my life, and hated when school began, because that was the end of my endless daydreams and freedom. Needless to say, I was not an A student. The only A's I got were in ART.

I was always drawing. My drawings became cartoons, and eventually I discovered writing. Unfortunately my spelling was horrible. It was brought to my attention plenty of times.

But that was the past. This is now. Computers. Who knew there would be such a thing as "spell check"?


I spent at least 30 years writing and querying agents, and publishers (back in the day), and had no luck. My first book that I ever held in my hands was Spell of the Black Unicorn, self published, but worth it to be able to have people buy it, have a book signing at Borders. Plenty of people loved it and wanted more. (I have written a sequel, but I'm busy writing my vampire series now.)
After this, I had to write my own vampire novel, since everyone was so into it. Finally! But alas, agents continued to reject me. I finally tried eBook publishers, but I simply got no where with this. So, finally I found Copperhill Media, who published my first vampire novel, Vampire Ascending, and is about to release my second book in this series soon (in 1011).
I was into vampires before it was "cool". Believe me. I was considered strange or weird. But I didn't care, I got along fine with my solitude. Writing came naturally to me. It was the understanding of plotting, and the art of writing that I had to learn over the years. Now, I'm happy to see that so many people enjoy my first book so much, they want the second book right now! 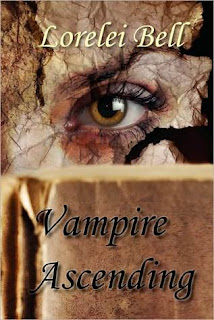 
Sabrina Strong is a Touch Clairvoyant who knows a secret. She knows her mother was turned into a vampire when Sabrina was ten. Now that she is grown up, a powerful magnate in the Chicago business world hires her to reveal the identity of who relentlessly murders vampires in his ultra-modern stronghold of a hotel. Sabrina is not thrilled about the aspect of working for vampires, but she needs the money, and she wants to find the gorgeous and mysterious vampire who has been turning up in her dreams. Is he the one who bit her when she was ten, marked her for his own, and turned her mother so long ago?
Little does Sabrina know that her whole life is about to change when her best friend becomes a victim, too, and Sabrina is the only one who can find her. Her friend's fate intensifies the desperate need to find the murderer and, consequently, brings her into contact with a rogue vampire.
Sabrina is quickly immersed in romantic trysts and dangerous situations involving scheming vampires, shift changers, and werewolves. 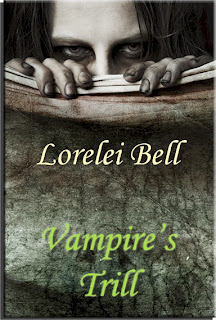 
Magic on the Line (Allie Beckstrom, #7) by Devon Monk
Nightshine (Kyndred, #4) by Lynn Viehl
North of Need (Hearts of the Anemoi #1) by Laura Kaye
Not Your Ordinary Faerie Tale (The Others #12) by Christine Warren
Shadowlander (Shadow Sisters, #1) by Theresa Meyers
Under Attack (Underworld Detection Agency, #2) by Hannah Jayne

Feel free to let me know if you see a mistake or post a release I missed in the comments. Happy Reading =)