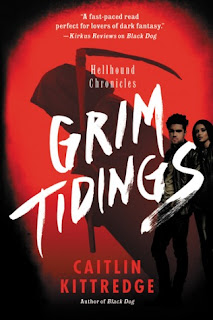 In this thrilling sequel to Black Dog—the first volume of award-winning Caitlin Kittredge’s dark urban fantasy series, Hellhound Chronicles—a soul catcher must stop demonic monsters from her past from infecting the world.

After winning her freedom from a reaper and facing off against a fearsome demon boss, Ava is now a masterless hellhound. Her friend, Leo, has found a new life after death: He’s returned as the Grim Reaper—the first in centuries. As both try to adjust to their new circumstances, Ava’s dark past comes back to wreak havoc on her . . . and the entire world.

A breed of monsters as smart as vampires—but who behave like zombies—has been sighted in Kansas. Ava can’t believe these “zompires” are back. She thought she’d kicked their asses for good when she first battled them in a Nazi death camp. Now, they’re spreading their infection across America’s heartland thanks to a nasty piece of business named Cain.

Free at last after being locked up in Hell for millennia, Cain has some scores to settle. To stop him, Ava must form an unholy alliance with some old foes . . . a bargain that will lead her to uncover deeply buried truths about her past—and Leo’s future.

Caitlin started writing novels at age 13. Her first was a Star Wars tie-in. Fortunately, she branched out from there and after a few years trying to be a screenwriter, a comic book writer and the author of copious amounts of fanfiction, she tried to write a novel again. Her epic dark fantasy (thankfully) never saw the light of day but while she was struggling with elves and sorcerers she got the idea of writing a story about a werewolf who fought crime. Two years and many, many drafts later, she pitched Night Life to a bevy of agents and one of them, Rachel Vater, sold the series to St. Martin’s. Caitlin collects comic books, print books, vintage clothes, and bad habits. She loves tea, loud music, the color black (especially mixed with the color pink) and ghost stories. She can drive a stick shift, play the violin and knows more English curses than American ones. Caitlin lives in Olympia, WA with two pushy cats.