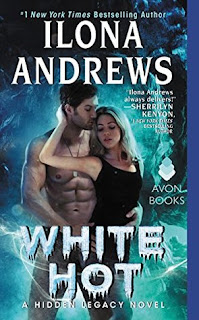 Nevada Baylor has a unique and secret skill—she knows when people are lying—and she's used that magic (along with plain, hard work) to keep her colorful and close-knit family's detective agency afloat. But her new case pits her against the shadowy forces that almost destroyed the city of Houston once before, bringing Nevada back into contact with Connor "Mad" Rogan.

Rogan is a billionaire Prime—the highest rank of magic user—and as unreadable as ever, despite Nevada’s “talent.” But there’s no hiding the sparks between them. Now that the stakes are even higher, both professionally and personally, and their foes are unimaginably powerful, Rogan and Nevada will find that nothing burns like ice …

I was so very sad when it was announced that book two, WHITE HOT, was going to be delayed for a re-release of BURN FOR ME. I read BURN FOR ME immediately upon release so it was a very long almost three year wait. BUT, I re-read BURN FOR ME and all the great reasons I fell in love with Nevada and the Hidden Legacy world came flooding back very quickly and I was ready to read WHITE HOT when it so lovingly landed in my lap.

A short two months have passed since the events of BURN FOR ME took place. Has Nevada and Mad Rogan seen each other? Has anyone found out her secret? Every moment of finding out the answers to those questions and more was great.

I absolutely love both Nevada and Rogan separately, but together? They are truly something else. Sparks are always flying whether it's because they're fighting each other, fighting their attraction, or giving into it. They both have strengths that they bring to their relationship and watching that relationship evolve is pure entertainment.

On top of the romance we get in WHITE HOT, we also get to learn a lot more about Rogan and his past. His story was not only mind-opening, but also heartbreaking. He has been through alot and learning it made me love him even more than I already did and I felt like I truly understood him and his faults so much better.

The worldbuilding in this series is fantastically done. I love learning about the different magics and people. Nothing is introduced without a reason and the reason is always intriguing. The ending of WHITE HOT left me yearning to find out how things would end for Nevada and her family—although I really don't want their story to end. Do yourself a favor and put this series on your to-read list, you won't be disappointed.