UFI welcomes Nessie Strange Author of Living Dead Girl. Thanks for Joining us!!

What makes a good urban fantasy story? This is something I've thought about a lot, both as a reader and a writer. I've tried so many books, and while I've enjoyed much of what I've read over the years, there are a rare few books that just sank their claws into me and didn't let go until long after I'd finished reading. As a reader, finding these gems is part of the excitement when we search for more material. As writers, we hope to find readers who will feel that way about our work.

I don't think there's a magical formula for what will resonate with readers. I'd imagine urban fantasy isn't much different from any other genre. Readers want to become completely immersed in stories. With a good story, we've stepped into an alternate world, where we're experiencing the lives of these characters. Whether we want to be scared, or kept on edge, or have our hearts captured by true love, I think in the end we're all looking for escape. This doesn't necessarily mean we're unhappy, or dissatisfied with real life. Reading is simply the chance to visit a place we've never been, go on an adventure, or witness the rush of a new love.

What initially drew me to the genre was this notion that there's this magical, fantastical other-world right under all of our noses. We might not all see it, but it's intertwined with our daily lives. That makes these stories seem like they could on some level be plausible, because they happen in places, or scenarios we all recognize. Now this doesn't mean I actually believe that I'll meet a vampire or develop supernatural powers, but with a good urban fantasy story, I've met someone who could be my neighbor, co-worker, friend or family member and they've experienced this.

As with any genre, I think characters are crucial. You don't have to love them or even agree with what they do, but you do need to feel that they're living, breathing, thinking human beings. In a good story, the author has achieved this. Real human beings think, feel, react and interact, therefore believable characters must also do this. It's not as simple as telling the reader about a series of events. It's weaving the threads of a story through the life of a character. If I, as a writer, create a living character, then I should be able to put them in any situation—no matter how far-fetched—and a reader will believe.

The only limit is as far as your imagination will go—in urban fantasy anything can happen, and that's something I find exciting about reading and writing the genre. I also find it frustrating when authors don't bring something unique to the table. I think this is where the collective eye-roll comes in at the mention of vampires, for example, because when a certain formula works, suddenly you have many stories using the same formula and it gets boring. As readers, we find ourselves thinking—yep, I've seen this before. That being said, I firmly believe that there is more material out there for vampires, zombies, fae, etc. The key is for writers to challenge themselves, and hopefully discover something that will capture many imaginations.
__________________________________

Nessie is a Massachusetts native and mother of two who has dabbled in everything from abstract painting to freelance sports reporting. She also loves a good story, whether it’s reading or writing one. Active membership in a writer’s critique group has helped erase the memory of two horribly written practice novels. LIVING DEAD GIRL is her first real novel. 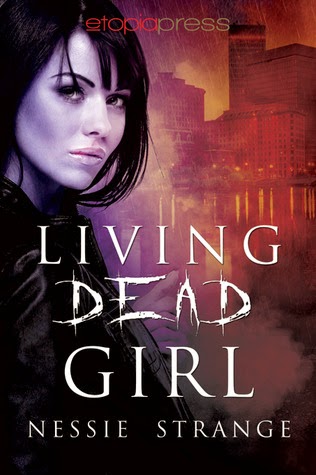 Jen knows tattooed, blue-haired Jack Norris is trouble the minute he opens his front door. And being a mortician in the avante garde East Side of Providence, Jen has seen a lot. Jack has recruited Jen’s teenage brother Drew to play drums for his less-than-respectable punk band, and Jen has no choice but to follow their gigs to keep her little brother out of trouble. But when Drew goes missing, she finds herself in the awkward position of asking for Jack’s help. Shocked that he agrees, Jen decides she may have misjudged him. Worse, she might even like him.

But when Jen is brutally attacked, she awakens in the hospital where a Sid Vicious look-alike greets her with the news: she’s dead, and he’s the reaper assigned to take her away. Yeah, not so much. Refusing to leave, Jen’s spirit watches helplessly as her loved ones suffer, powerless to ease her family’s grief or prevent the police from accusing Jack of her murder. Desperate to help them, Jen convinces the reaper to bring her back. But reanimating corpses isn’t as easy as it looks, and neither is finding a killer before it’s too late…