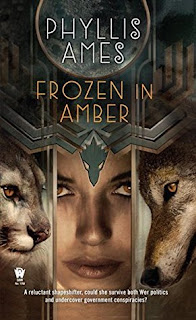 
Amber Treganis constantly reinvents herself. New clothes, new hairstyle, new car—anything she can do to exert a level of control over her life. What she can't control is her shape-shifting other self: the WerCougar that sinks its claws into her brain during the three nights surrounding the full moon.

Though she is a natural-born shifter from a prominent WerCougar family, Amber has been unwilling to change into her cat form ever since a terrible tragedy cost her the man she loved. And she has little patience with Wers of any species who embrace their otherness more than their humanity. She focuses on her life as a defense attorney in Mt. Hood, and stays out of Wer politics.

But after a blurry night of hunting, Amber begins to notice changes in her transformation. When she hears rumors of research to discover a treatment for shifting, she suspects she may have been unknowingly given the experimental therapy.

With the help of Adler, a WerEagle active in community politics, Amber tries to hunt down the truth about this cure, while staying off the radar of the FBI, which tracks and manages Wer communities in secret.

But Amber doesn't realize how much she depends on her Wer sense until, one by one, they begin to fade. And Amber is left increasingly ill—and increasingly human. Can shifter who is losing her abilities survive for long in either human or Wer society?


I can't lie, the cover for FROZEN IN AMBER did not draw me in and make me want to read the story, thankfully the blurb did a better job of that. It took me a little bit to get into the story as it started with a lot of legal drama that wasn't a huge interest to me, but the characters grew on me and the storyline picked up and kept me reading.

I liked Amber as a main character, she's a shifter, but doesn't want to be one. I enjoyed the way she thought and was happy with her growth throughout the story. There is a lot of soul searching for her and in the end she is finally happy with herself. There is some romance, but it was very much in the background with the storyline and world taking the front spot in the readers mind.

I enjoyed the world building. Ames provided a lot of information on how the wers come to be and how the world works. There are a lot of different characters to get to know and it was fun finding out about the creatures they turned into. The mystery wasn't as mysterious as I wanted it to be. There were a lot of dead giveaways to who the bad guys were and although one managed to evade my suspicion for a while, I still figured it out before it was revealed.

So in the end I did end up enjoying FROZEN IN AMBER, however I am glad that it was a standalone novel with an ending storyline because I am not sure that I would have been interested enough to come back for more. Have some extra time on your hands? FROZEN IN AMBER is worth the read.