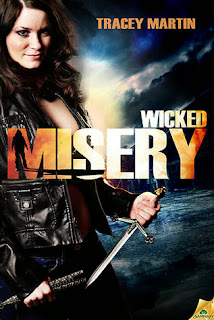 It s all quasi-legal fun until somebody gets framed for murder.


What a fun new series. There was a little bit of romance, a whole lot of supernatural with danger and drama in between. Jessica has what she believes is a goblins curse where she thrives on misery. She uses her 'curse' to hunt down the dregs of society but one night she ends up framed for murder.  Jessica had dreams of being a part of something else but ended up with this curse that she can not stand. WICKED MISERY follows her as she learns more about who she is while trying to keep herself out of custody and searching for the real killer.

When Jessica turns to Lucen for help she has no idea what will happen. She thinks it is Lucen's gifts that make her want him but you can tell she likes him for other reasons as well. They dance around each other constantly and there were points I wanted to hit both of them over the head and be like, hey get over yourself. The plot was pretty fun to follow. There was a particular action part of the book that got a little confusing because I felt like we were thrown into the situation out of nowhere but other than that I enjoyed every other part of the story. There are many paranormal creatures introduced in WICKED MISERY. They are not looked well upon by normal humans but I liked what they have made of the slice of world they live in. Walking the streets with Jessica was never boring.

WICKED MISERY was a pretty descent start to a new fun and fast paced Urban Fantasy series. I look forward to seeing what happens next and what might happen between Jessica and Lucen in book 2.