UFI welcomes Debbie Viguié  Author of The Witch Hunt Series. Thanks for Joining us!!

A tough question right off the bat! I had three different careers that I was interested in and pursued: veterinarian, actress, and writer. It wasn’t until after I received my undergrad degree and had a taste of all three worlds that I finally chose to be a writer. I actually made the decision while having dinner at a writer’s conference with Nancy Holder and Michael Palmer. There literally was one moment when everything became crystal clear and I knew that I should pursue writing.

I love to go to the movies. My husband and I also spend a lot of our free time in theme parks. I also love acting and take part in community theater whenever I can.

My favorite part of the writing process itself is that first spark of inspiration. I love when a new idea hits me and I feel this pressure to capture as much of it as I can on paper. My favorite part of the profession is when my editors send me pictures of my cover and there is that breathless excitement as I’m opening the file and can’t wait to see what they’ve come up with.

I have a playlist of music specific to each book which captures the tone I’m going for and helps put me in the right mood for that story. When a deadline is looming I pop in the first disc of the extended edition of Lord of the Rings: Fellowship of the Ring and have it on endless loop. It makes me write faster and gets my creative juices flowing every time.

Hands down Nancy Holder and James R. Tuck. That’s part of the reason I write with them!

How would you pitch your Witch Hunt series to someone who has not heard of it before?

It’s a fast paced, intense thrill ride that uses magic to explore the war between good and evil in the world and in the heart of reluctant witch hunter Samantha.

Can you tell us a little bit about the world that the series is set in? Can the books be read as stand-alone novels?

The world is one where magic exists and some people have the ability to wield it, mostly through manipulation of the electrical and magnetic fields around them. The powers are genetic, passed down from parent to child. Some use them for good, some for evil, and some are just sort of neutral. The books can be read as stand-alones but are more enjoyable when read together because it provides even more depth.

Do you have a favorite scene in Circle of Blood?

The scene at the abandoned, decaying Jazzland theme park. The park was destroyed in Katrina and never rebuilt. I did a lot of research and found fabulous pictures online taken by urban explorers documenting the place. It is super creepy and I loved setting part of the book there.

I love writing Ed, Samantha’s partner from Boston. He is so funny and sarcastic. The banter between them is hilarious and just comes very naturally as I’m writing. Samantha in the first part of this book was the hardest to write about because she’d gone pretty dark after the events of book two and it was difficult finding a balance so that she was being evil but not too evil that the audience couldn’t forgive her when she came back to her senses.

You have written a few books as part of a pair. Do you feel it’s easier or harder to write as a pair or on your own?

Both have their perks and their challenges, honestly. Writing on your own gives you complete control over everything which can be nice. However, writing with someone else can really help you come up with creative solutions to problems. Also, if there’s a scene I just don’t want to write or am not feeling, I can pass it on to my co-author to deal with and vice versa.

I have a number of books already out including my vampire series (Kiss of Night is the first one). I’m working on a supernatural retelling of Robin Hood with James R. Tuck that is going to be awesome. Also, Nancy Holder and I have a teen thriller coming out in a little over a year.

Debbie Viguié is the New York Times Bestselling author of over a dozen novels including the Wicked series and the new Crusade series co-authored with Nancy Holder.  Much of Debbie’s writing has a dark edge to it, including her retold fairy tales, her latest being Violet Eyes, a retelling of The Princess and the Pea.  In addition to her epic dark fantasy work Debbie also writes thrillers including The Psalm 23 Mysteries and the upcoming Kiss trilogy.  When Debbie isn’t busy writing she enjoys spending time with her husband, Scott, visiting theme parks.  They live in Florida with their cat, Schrödinger. 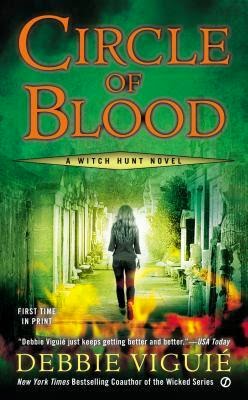 
Samantha Ryan—cop by choice, witch hunter by necessity—is about to confront the witch who has been secretly manipulating her life. But her search for the truth about her past may end in her death.…

All her life, Samantha Ryan has been haunted by a circle of blood, which she has tried to keep at bay—ever since she escaped a vicious Salem coven of witches as a child. But now her carefully constructed life has given way to the darkness she might have embraced, had she not run away.

Angry, focused, and more than willing to use her powers on anyone who gets in her way, Samantha travels to New Orleans to confront Lilith Black, the witch who has been mercilessly shaping events around her for months.

But little does Samantha know that her own nightmarish past and Lilith’s are inescapably intertwined—and that what Lilith wants most of all is for Samantha to suffer until her final breath.