Dark and Deadly: Eight Bad Boys of Paranormal Romance Boxed Set is now available worldwide for a special introductory price of only $0.99!

Here’s more about this fantastic eight book boxed set, including an excerpt from one of the stories.
Dark and Deadly: Eight Bad Boys of Paranormal Romance is available from Amazon Kindle, Kobo Books, Barnes and Noble Nook, Apple iBooks stores and other retailers. Find the links to your preferred retailer at: http://www.felicityheaton.co.uk/dark-and-deadly/
__________________________________ 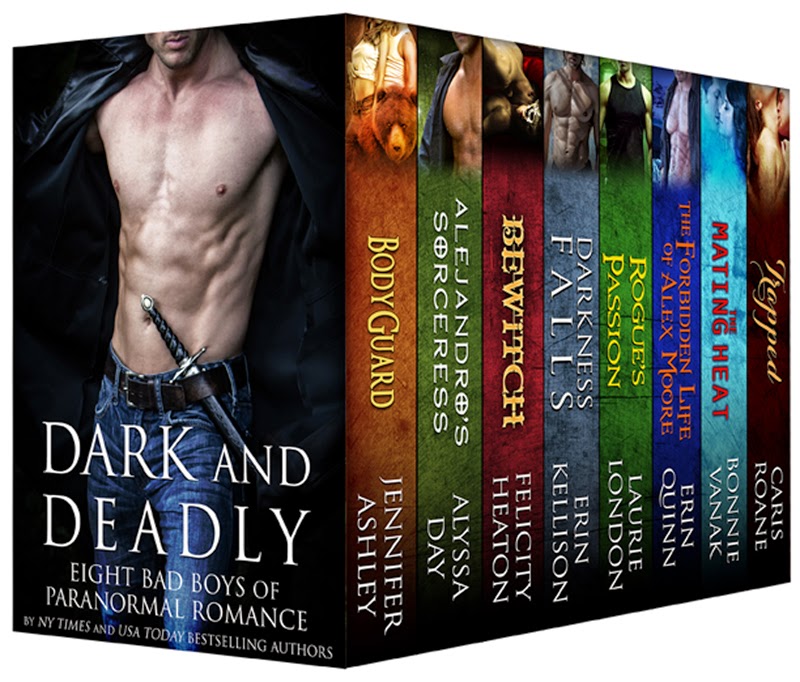 BODYGUARD by Jennifer Ashley
Elizabeth Chapman is saved from an armed attacker by a Kodiak bear who shifts into a tight-bodied, naked human male. Ronan takes Elizabeth to Shiftertown, becoming her 24/7 bodyguard. The mateless Ronan has adopted a houseful of orphaned Shifters--having grown up in foster care, Elizabeth is touched by his protectiveness. Ronan only wants to keep Elizabeth safe, but the sassy woman is triggering his long-buried need to mate.

ALEJANDRO’S SORCERESS by Alyssa Day
He’s a warrior, hardened by years of protecting his town from vampire attack. She’s a garden witch who sees the world in shades of sunshine and delight. Opposites don’t only attract, they go supernova in this sizzling tale of magic and mayhem.

BEWITCH by Felicity Heaton
A vampire with a bloodstained past and a soul tainted with darkness, Payne is perfect in his self-control, never surrendering to his darkest desires. Now a beautiful witch in the shadowy fae underworld reawakens long denied hungers and tempts him with pleasure. When one incredible night of fulfilling their fantasies leads to more than just keeping a promise and saving a friend, will they be able to overcome the barriers that stand between them and forever?

DARKNESS FALLS by Erin Kellison
Agent Malcolm Rook is hunting for people with the rarest of talents—the ability to master dreams. He finds the undeniably gifted Jordan Lane, but she’s wary of mysterious Rook and resists his pursuit as long as she can. Yet the dreamwaters they enter are too exhilarating to resist, and attraction soon ignites electric passions. Delving too deep stirs a nightmare, one they must defeat, or be forever lost to darkness.

ROGUE’S PASSION by Laurie London
Blaming himself for the death of a friend, Iron Guild warrior Asher Kane vows to bring those responsible to justice. After he’s hurt on a mission and nursed back to health by a beautiful yet mysterious woman, this dangerously sexy bad-boy finds himself falling for Olivia…even as he struggles to stay away. But stalking them on the streets of New Seattle is a cruel and vengeful evil—one that threatens to destroy them both…

THE FORBIDDEN LIFE OF ALEX MOORE by Erin Quinn
Alex’s mission: Kill the hellhounds that have invaded earth and return to his home in the Beyond. But from the start, things go horribly wrong. The hounds are cunning and a human female witnesses their attack—she intervenes and saves Alex’s life. Now he must keep the alluring Lilly alive while fighting his desire for her. When passion flares, Alex risks all to protect her and defend the forbidden life he craves.

THE MATING HEAT by Bonnie Vanak
Werewolf Kara Mitchell fled with her brother Aiden to Montana after their alpha father punished her for kissing sexy omega werewolf Ryder Carrington. Left scarred by her father’s cruelty, Kara believes no one can love her. After killing his alpha to save the pack, Ryder now rules, but needs a mate. His blood runs hot for Kara. Ryder will do anything to claim her, even risk an all-out pack war that could cost them everything…

TRAPPED by Caris Roane
Mastyr Vampire Zephyr, a one-man fighting force, struggles to save the life of a woman who despises his warrior ways. She’s been a thorn in his side, but he has one goal: to keep her safe. For Alesia, however, she just wishes he’d leave her alone since she can never approve of his profession. She broke up with him months ago and wants to start a new life. The trouble is, he’s still the one man who can curl her toes.
__________________________________

EXCERPT FROM BODYGUARD BY JENNIFER ASHLEY


The bear climbed to his feet, swung his great head around, and fixed red-raged eyes on Elizabeth.

He was the biggest living creature Elizabeth had ever seen. On all fours, the bear stood about six feet tall at the shoulder, which put his head well above Elizabeth’s. His breath huffed between immense and sharp teeth, his growls rumbling from his throat like thunder. His gaze still locked on hers, he took a step toward her on one massive paw.

Elizabeth brought her hand up, aimed the can of pepper spray at his face, and gave him a full dose.

The bear blinked, drew back, blinked again, sat down on his hind legs, and rocked his head all the way back. Then he sneezed.

The noise exploded into the room like a sonic boom, vibrating papers on the desk and rattling the Victorian prints on the walls in their prim and proper frames.

The bear rose on his hind legs again and kept rising, ten feet—twelve—fifteen, his bulk hunching to fit under the low ceiling. At the same time, his immense body started to shrink. The bear’s face contorted, muzzle shortening, as did, thank God, his teeth.

In about thirty seconds the bear was gone, and a man stood in its place. The man was just as massive as the bear—at least seven feet tall, with chocolate brown hair buzzed short, eyes as dark as the bear’s, an almost square face with a once-broken nose, and a chin and jaw dark with five o’clock shadow.

He wiped his streaming eyes. “Shit, woman,” he said in a voice that brought down a trickle of ceiling tile dust to whiten his hair. “That itches.”

Please note that this is NOT the boxed set that's being featured by this barrage, but an earlier release, and that this giveaway is international. 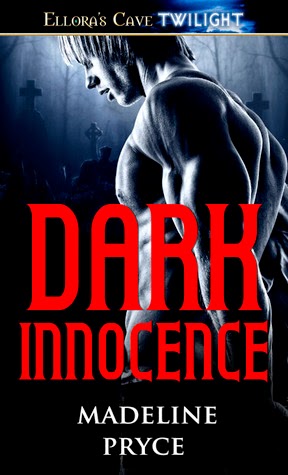 
Hannah Grey will do anything to escape the tortured memories haunting her. Every breath brings back the pain, the fear and the unbearable knowledge that she’ll never be the once-perfect girl everyone thought her to be. When the self-destructive fog of drugs, alcohol and meaningless sex starts to clear, Dante, a lion shifter sexier than sin itself, emerges through the darkness ready to rescue her for the second time in so many weeks.

In the safety of Dante’s embrace, Hannah allows herself to become the woman she’s always wanted to be—smart, sexy, capable and empowered. His every touch electrifies. His hot, hungry kisses set her senses ablaze. As Dante masters her body, Hannah finally finds the strength to master her fears.

Perfection shatters as a mysterious vampire escalates from anonymous phone calls to violent encounters. When Hannah’s enemies unite, placing both her and Dante in mortal peril, it’s going to take all of her newfound strength to face the coming darkness and save the man she loves.

After her torture at the hands of the old vampire queen, Hannah would do anything to escape the memories of what happened to her. This leads her on a path to drugs, alcohol and sex. No matter what she throws at herself the handsome Dante is always there to pick her up. When she is targeted by a deranged Vampire hell bent on turning her into his new queen Dante is once a gain there to keep her safe.

We were introduced to both Hannah and Dante in book 1 of the Dark series. We know what Hannah went through and we watched a bit of the bond form between the two after the events that occurred. When I saw that book 2 would be about these two I was a little bummed because I really wanted more Ella and Micah, but after reading DARK INNOCENCE I was left glad I was able to watch their story together begin.

The romance between the two was fast and furious. The scenes were steamy and full of feeling. We got to watch Hannah come out of her shell of despair and we learned about who Dante really is. Although the book was focused on them we still got a few scenes with Ella and Micah.

Another fast paced, easy flowing story with plenty of romance and danger from Madeline Pryce. It was really nice getting to know Hannah and Dante and I look forward to seeing them in the next book, even if they aren't the main characters.

Cover Reveal & Giveaway : Love Me To Death by Marissa Clarke 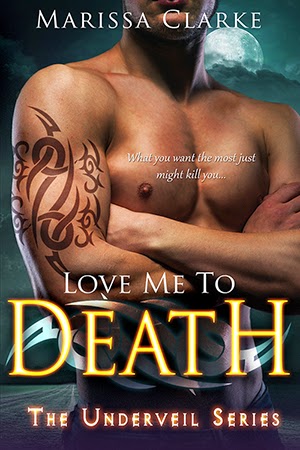 Love Me to Death

Marissa Clarke lives in Texas, where everything is bigger, especially the mosquitoes.

When not writing, she wrangles her rowdy pack of three teens, husband, and a Cairn Terrier named Annabel, who rules the house (and Marissa's heart) with an iron paw.

She loves to connect with readers, so follow/friend her on Facebook and Twitter (buttons in the bar above), or shoot her an email from the "Contact" page.

Marissa Clarke is a pseudonym. Her real name is Mary Lindsey and she also writes young adult novels for Penguin USA.