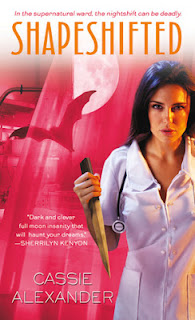 Nurse Edie Spence is once again called upon to save a life…and this time, it’s personal. Can her new community of zombies, vampires, and shapeshifters come to her rescue when she needs them most?

When Edie was fired from her paranormal nursing job at County Hospital, her whole world came crashing down. Now she’s is once again shaken to her core. Her mother is deathly ill and there’s only one thing that will save her: vampire blood. But with the paranormal community shunning Edie, where can she obtain it…without losing her own life in the process?

Edie hopes to procure it at her new job at the clinic across town, where the forces of evil loom large. Vampire gang wars are rampant. Old underground enemies are rising to the surface. And Edie’s zombie ex-boyfriend has arrived at the scene—but is he the same man he used to be? And what should she make of the enigmatic doctor with whom she shares an unexpected connection? She’ll have to figure it out soon, because all hell is about to break loose—literally—and time is running out…


SHAPESHIFTED started out a bit depressing. Edie is miserable. She hates her job working at a sleep clinic. She is seeing a therapist who thinks she is mental. She has no friends anymore and then she gets the news that her mom is dying. She immediately goes to talk to the shadows. They refuse to help and send her out to find a myth.


Edie decided to take a job at a clinic in a bad part of town and things start shifting for her and people that she thought she would never see again started showing up. One was TI and I was not happy to see him but it all worked out for the best. We get introduced to a few new characters, one of which Olympio I think will make a future appearance.  I was not surprised with the clinic doctor, I guessed pretty early on why he was in the story. The story itself was a nice mystery.

SHAPESHIFTED was not my favorite of the series but it kept me interested and I enjoyed it overall. The ending specifically was pretty awesome. I'm so proud of Edie and can not wait to see where Cassie takes her next.