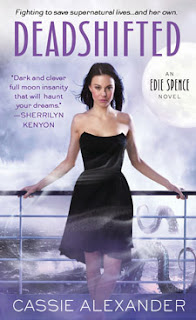 
Edie Spence just wanted a vacation. A nice, relaxing, stress free, non-adventure away from the craziness that's dominated her life since becoming a nurse for paranormal creatures. But from the start, her trip on the Maraschino, a cruise ship bound for Hawaii, has been anything but stress free, especially when Edie's boyfriend Asher recognizes someone he used to know. Someone from his not-so-nice past. With their lives in the balance, will Edie and Asher be able to save their growing family or will this adventure be their end?

Book 4 ends up being pretty grim for the most part. There are a lot of dark times and death involved. I enjoyed meeting some of the new characters that are present for most of the book and hope to see them again in future books. Edie as always is headstrong and caring. There is a pretty big medical crisis going on and although she's worried about herself she worries a lot more about others. I didn't always agree with how she handled things and I cringed many times when she put others before herself considering what she was going through. Asher has started to grow on me. He still isn't my favorite person but considering what Edie has dated in the past he is a step up and he seems to treat her well.

The setting was interesting. The whole book takes place on a cruise ship. It does NOT go well. There is some pretty big news revealed in the beginning and it makes the story that much more stressful to witness. Fair warning, the author describes things in great detain and again there is a LOT of death. She really did a good job making you feel you were right there.

When the last chapter ended I was left rather disappointed that things took the turn they did. I don't want to ruin the ending so I will just say I really hope the vibe I am getting is wrong and the next book things wont be as bad as I am picturing. =/