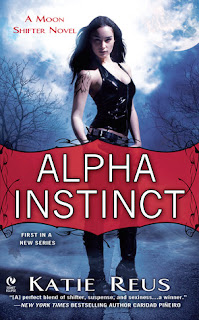 After all the men and pregnant woman of her pack dies Ana stepped up as the Alpha Female. The only problem with that is that in her world the men have all the power and woman are not given the support to lead their own pack. A neighboring Alpha is set on having Ana and her pack for himself and will stop at nothing to have it. All this leads Ana to accepts the protection and help of her childhood love Connor even though she vows not to let him back in her heart because she doesn't want to get hurt again.

I enjoyed watching Ana and Connor shift around their feelings for each other. From the start you could feel their bond and protectiveness as well as their attraction for each other. Connor stated off way to pushy which lead Ana to believe he wasn't really wanting her but the pack she had behind her and because of Ana's reaction to him Connor pushed that much more to get her to want him as a mate. The sexual tension was there from the start and it was quite a frustrating ride until they finally gave into each other. There was a great amount of conflict, action and emotion behind ALPHA INSTINCT. I had many guesses at who was responsible for poisoning the pack but I didn't see the real killer until they were about to be revealed. There were a few slow parts but Katie did a good job of keeping me interested in the story. I enjoyed getting to know all the secondary characters. I was kinda sad to see that future books would be following different characters as they find their mates but Ana and Connor were a great start to the series.

Liam, Connor's brother starts his journey with his mate in the background of ALPHA INSTINCT I liked getting to know him and his match a little before their book starts next. I really enjoyed the first installment of Katie Reus' Moon Shifter series and am most defiantly planning on continuing with Liam's mating journey in book 2.