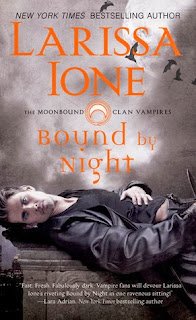 A WOMAN OUT FOR BLOOD
Nicole Martin was only eight years old when the vampire slaves rose up in rebellion and killed her family. Now she devotes her life to finding a vaccine against vampirism, hoping to wipe out her memories—along with every bloodsucker on the planet. But there’s one thing she cannot destroy: her searing, undeniable attraction for the one man she should hate and fear the most . . .

A VAMPIRE OUT FOR REVENGE
A member of the renegade vampire MoonBound Clan, Riker is haunted by demons of his own. When he recognizes Nicole and remembers how her family enslaved his loved ones, his heart burns for vengeance. But when he kidnaps Nicole and holds her in a secret lair, his mortal enemy becomes his soul obsession, his greatest temptation, and, perhaps, his only salvation—a hot-blooded lover who could heal him with her touch . . . or bury him forever.


I enjoyed the few books i have read in Larissa's Demonica series so when I was asked to review BOUND BY NIGHT I had no problem saying yes.

Nicole grew up with vampire slaves as servants. They were her cook, her nanny, her gardener, you name it they did it until they day they rebelled and she almost died. Since that fateful day she has devoted her life to finding vaccine against vampirism. Riker hates the Martin family with everything in him. When Nicole comes home to take over the family business he sees it as the chance to wreak vengeance on the family once and for all. Unfortunately his plan does not play out as planned.

I enjoyed the pacing and writing style of BOUND BY NIGHT. You can not help but feel invested in the outcome of the storyline and the characters. Nicole knows who she is and does not try to push what her faults on others. She does not back down easily and pushed for what she felt was right. Riker, Riker, Riker. Ugh he is a pain in the butt but you can not help but fall for his alpha male attitude. Both Nicole and Riker are beyond stubborn. They truly fit together but each one has moments of cowardice, idiocy or the like that keep them at each others throats for most of the book. The world is a bit crazy. The humans think they are superior and do anything in their power to control Vampires. We get just enough out world building so that we understand what is going on but I think there is much more world to explore.

The Moonbound Clan Vampires series will be like her others and will feature new main characters with each book but I can not help but want to stick with Nicole and Riker. There is so much more of them I want to see. I will have to grab book 2 just so I can see how they are doing and what happens with the new characters though. Sigh I'm invested =)