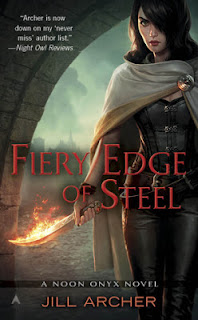 
I hate to have to admit it, I enjoyed book 1 more than FIERY EDGE OF STEEL. Although a lot happened it just didn't catch my attention as much as DARK LIGHT OF DAY did. I missed Noon's friends and her school life. She did learn new things on her journey but I had a hard time staying in the zone. It started off really slow and didn't really pick up as the book moved on. I found myself hoping that scenes would end but they just kept going sometimes. I am a tad bit confused about some ending events but I can not mention what confuses me without giving away spoilers. The magic was nice to witness and there was growth. I'm pretty bummed about what happened towards the end, I am sure you will be too.

I'm at a loss for what more to say without giving away things you probably want to read for yourself. Hopefully book 3 will be more like book 1. I am willing to keep reading to find out.