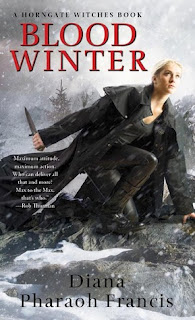 Set in apocalyptic America and featuring a magically enslaved heroine who is “a riveting mixture of guts, compassion, and furious anger as she struggles with a world coming apart at the seams” (Romantic Times), the fourth in a dynamic dark urban fantasy series unlike anything you’ve ever read before.
Winter is coming to Montana and Shadowblade warrior Max is expecting trouble. People are hoarding everything. They are banding together, many flocking to the congregation of Sterling Savage, a fire-and-brimstone preacher. A charismatic cult leader who claims to be the Hand of God, he’s determined to create a human utopia and destroy all magic, starting with witches.

Unbeknownst to him, the “divine” voice he’s been hearing isn’t God but a demon that feeds on hate, death, and destruction. Savage is the perfect puppet for the demon’s ambitions. Max and her people at Horngate are all that stand in its way, and they are woefully unprepared.

Conducting terrible, bloody ceremonies to boost his own power and that of the demon riding him, Savage starts a war between his congregants and two other powerful gangs in the city, fighting for food, fuel, clothing and territory. When he manages to capture Max’s niece, brother, and several teenagers from Horngate, Max tries to free them but finds that Savage has twisted their minds. They worship him—even her brother, who is a witch and whom Savage intends to burn at the stake. Going undercover in the cult compound, Max swiftly realizes just how seductive Savage is. His charisma is reinforced with magic. His followers adore him and will do anything for him. Anything.

But courage, loyalty, and friendship are powerful forces—and Max doesn’t like to lose.


BLOOD WINTER is the fourth book in the Horngate Witches series. This is a series you will want to start at the beginning with.

Max the female heroine has come a long way from the hate filled distant Shadowblade we first met in BITER NIGHT. Max has stepped up to the plate for the members of her team and for the Horngate community and continues to put them first even though she might not make it out of a situation. As for Max and Alexander's relationship. As in previous books there is a lot of up's and down's between the two. Max has a really hard time expressing her feelings and coming to terms with what they are together. Alexander definitely hurts her in BLOOD WINTER and I wasn't totally happy with the ending of their distance. It seemed a little to easy but I wont dwell on it because I love them together. We don't see the Sunspears in book 4 but the Shadowblade's are very prominent from beginning to end and I love their loyalty to each other. Max and Giselle's relationship has grown a ton since book 1. They have a mutual goal but I do love that they still bicker and have their disagreements. Max's family really annoyed me with their continued entitled selfishness. As always I enjoyed the new installment to the Horngate Witches series.

BLOOD WINTER was well paced with plenty of action and danger. We are introduced to some new characters and situations caused by the release of magic. We lose some more people but with the situations going on I'm sure that their will be more in future books if we are lucky enough to get them. Another reviewer mentioned that she read an interview where the author said BLOOD WINTER was the last of the series. I have not seen it and hope she is wrong. Although I like where most of the characters are in the end of Book 4 I by no means want it to be the end and there is so much we still don't know and answers still needing to be revealed. I need more!!!
I gave it 4/5 stars