UFI welcomes Tara Maya Author of The Unfinished Song Series. Thanks for Joining us!!

This is the sixth book in The Unfinished Song epic fantasy series. Haven’t read the other books yet? Come taste the world of Faearth... The first book is available right now for FREE.


Dindi landed hard, though a cushion of dry pine needles saved her from broken bones. Through a ring of lofty sequoia, she could see a glimpse of bright blue. She bit through the honeycomb Kavio had given her to protect her teeth. For a moment, she sucked the sweet wax, but its shape had been ruined by Kavio’s last blow, and she had to spit it out. She rubbed her jaw as she rebounded to her feet. Her shins were scraped bloody, and her left elbow throbbed. Ever since Kavio had started training her in Red, war dancing, she had been collecting bruises at an alarming rate.
The two of them were alone in the woods—unless one counted the sylphins perched in tree branches or the pixies cuddled in crocus buds, who watched and giggled—since their practices must be secret.
“Pathetic, Dindi,” Kavio scoffed. “You’re fighting like a girl.”
“What does that even mean?” she demanded. “Or is it just something boys say to feel superior to girls?”
“It means you don’t take yourself or your opponent seriously.”
“I take myself seriously…”
“No you don’t. You think of yourself the way a girl is reared to think of herself. Like a pretty pony in a field of flowers, a cuddly bunny rabbit, a doe frolicking in the woods. Like you need to play nice, nuzzle up to the rest of the herd. You need to think like a carnivore. Don’t nibble at me. Eat meat. You have to win your Shining Name. You have to think like a hero. Stop trying to be nice.”
“Heroes are nice…”
“Heroes are good; they aren’t nice. Why are you standing there? Strike again!”
She waved her staff in his direction, not connecting with anything but air.
“Muck it all, Dindi, you did it again.” He smacked her hard with the stave, knocking her to the ground. “Stop treating me with disrespect! That’s your second problem. You don’t respect your enemy!”
“I do!”
“Who is your enemy?”
“Right now, I’m fighting you, but…”
“Who is your enemy?”
“The person I’m fighting!”
“Wrong!” Kavio cut down with his staff.
“You can’t talk things out.”
Slash.
“You can’t make nice.”
Slash.
“You can’t compromise.”
Slash.
“You never fight a person.”
Slash.
“You fight a monster.”
Slash.
“And if you’re going to win, you better be the bigger monster.”
He was beating her back relentlessly. She kept ducking and backing away, but it was getting harder to dodge.
“Stop.” Slash. “Holding.” Slash. “Your blows!”
She smacked her staff forward, and the end of the pole slammed into Kavio’s solar plexus. He flew across the dirt clearing and landed on his back.
He didn’t move.
“Kavio!” she screamed, running to him.
He sat up, wincing. “That,” he said, “Showed respect. Do it again. And again. Until it’s instinct: always kill the monster.”

Tara Maya has lived in Africa, Europe and Asia. She’s pounded sorghum with mortar and pestle in a little clay village where the jungle meets the desert, meditated in a Buddhist monastery in the
Himalayas and sailed the Volga River to a secret city that was once the heart of the Soviet space program. This first-hand experience, as well as research into the strange and piquant histories of lost civilizations, inspires her writing. Her terrible housekeeping, however, is entirely the fault of pixies. 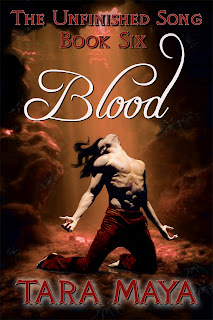 
Dindi and Umbral have an uneasy truce, forced to work together to defeat a greater enemy: the Bone Whistler. The Bone Whistler’s scheme to sacrifice humanity and resurrect the Aelfae will culminate during an eclipse on the spring equinox…in three days.

Their fragile alliance may not withstand the terrors they face. Dindi hides as a clown, but even disguised, her dancing draws the eye of the Bone Whistler himself. She will have to defy him alone, for Umbral has his own troubles.
Finnadro, who has hunted Umbral for a year, finally catches up with him… determined to punish Umbral for all his black deeds.

Life and death, spring and autumn, human and faery, are all reeling out of balance, and the next three days will determine the fate of all Faearth.