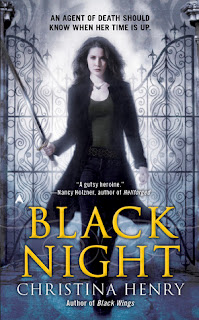 How can anyone NOT like Madeline Black and her awesome gargoyle Beezle? BLACK NIGHT continues the series with action, suspense, and fantastic characters.

I was disappointed with the non relationship between Maddie and Gabriel.  It was sorta uncomfortable to see them together with Gabriel refusing to be with Maddie. I liked getting to know JB and having him a bigger part of the story, I actually wouldn't be to disappointed if him and Madeline ended up together. We get to know Maddie's "fiance" a little better and I definitely dislike him with a passion. I really enjoyed the fairy realm portion of BLACK NIGHT and I loved the introduction of the werewolf's. I would love to see more of them in the next book.  Just like book one there is tons of action and the book is pretty fast paced. Maddie is learning to use her magic better and has to fight through some pretty nasty stuff and against some nasty people. She is turning into someone everyone will be falling over themselves to make sure she is on their side. Maddie has a chance to tell her father what she thinks and it was fantastic. Any fan of BLACK WINGS will be happy with book 2.