Cover Reveal: Demon From The Dark + Dreams Of A Dark Warrior by Kresley Cole 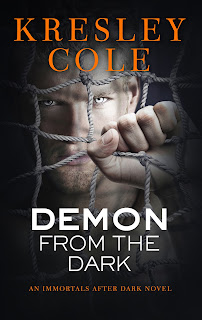 Demon from the Dark
Immortals After Dark #10

A DANGEROUS DEMON SHE CAN'T RESIST . . .

Malkom Slaine: tormented by his sordid past and racked by vampiric hungers, he's pushed to the brink by the green-eyed beauty under his guard.

A MADDENING WITCH HE ACHES TO CLAIM . . .

Carrow Graie: hiding her own sorrows, she lives only for the next party or prank. Until she meets a tortured warrior worth saving.

TRAPPED TOGETHER IN A SAVAGE PRISON . . .

In order for Malkom and Carrow to survive, he must unleash both the demon and vampire inside him. When Malkom becomes the nightmare his own people feared, will he lose the woman he craves body and soul? 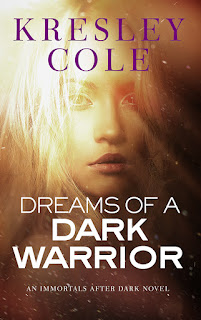 Dreams of a Dark Warrior
Immortals After Dark #11

Murdered before he could wed Regin the Radiant, warlord Aidan the Fierce seeks his beloved through eternity, reborn again and again into new identities, yet with no memory of his past lives.

She Awaits His Return...

When Regin encounters Declan Chase, a brutal Celtic soldier, she recognizes her proud warlord reincarnated. But Declan takes her captive, intending retribution against all immortals—unaware that he belongs to their world.

To Sate A Desire More Powerful Than Death...

Yet every reincarnation comes with a price, for Aidan is doomed to die when he remembers his past. To save herself from Declan’s torments, will Regin rekindle memories of the passion they once shared—even if it means once again losing the only man she could ever love?