UFI welcomes Rod. Belcher Author of The Six-Gun Tarot. Thanks for Joining us!!

What can you tell my readers something about yourself that they might not know from looking on your bio or reading in another interview?

Hmmm.  Let me see…Oh, I used to box, not professionally or anything. I just wanted to learn when I was in my early 20’s. I was doing Judo, fencing, Aikido, kendo- all this stuff, at the time and I decided one day I really wanted to learn how to box.  So I walked into this place on Hull Street in Richmond Virginia called “The Million Dollar Boxing Club”.  It was dive at the time and it was awesome! I was the only white guy in the place and I had no end of volunteers to spar with (hahahahahaha). It was very cool. That’s not very well known.
Oh, and I was in the running to do an internship with a criminal behavioral profiler for the Virginia State Police.  He was a very nice man, named Larry McCann, but I couldn’t do it because I wasn’t sworn law enforcement personnel. Those things are not too commonly known.
Oh, and my favorite booze is Tequila- no salt, no lemon, with a Budweiser chaser.

See the above mentioned booze preference (hahahaha).  But seriously, I like to read, I love doing stuff with my kids, I enjoy hiking and target shooting, I love research- finding all kinds of weird little corners of the world and of history. I’m a gamer. I enjoy boardgames and RPG’s and I have been kicking and screaming into videogame play- Skyrim rules!

That’s a hard question. I really enjoy the whole process, but I guess the character development and world building are two of my favorite processes

I did develop a process that I began with writing Six-Gun, however, that seems to work pretty well for me. I do a chapter summary just prior to writing the chapter. It helps keep me grounded and on focus to what I want to touch on and accomplish.  Certain kinds of music also help me write sometime- classical and trance.

How would you pitch The Six- Gun Tarot to someone who has never heard of it before??

The Six-Gun Tarot a wild multi-genre book set in the old west that mixes horror, fantasy and dark humor and if you buy it, my kids and pets get to eat! (hahahaha)

What can you tell me about the world that The Six-Gun Tarot is set in?

It is as grounded in the history of our world as I could make it and still tell the story I wanted to tell. It looks like our world, but you turn the corner and you can find yourself in a very, very different world—one of many and each world has its own rules, powers, beginning and end.

Do you have a favorite scene in The Six-Gun Tarot?

Which character was your favorite to write about? What about the hardest to write about?
I really try to make my characters as real as I can and I end loving all of them.  It bothers me to do the awful things to them I do—I am a bastard! (Hahahahaha)  I actually felt very sorry for the character of Holly- see I told you I’m a bastard!
I also hope I was able to give Harry and Ringo a fair shake.  I wanted to make that relationship feel real and not forced or token. I tried to just let the love come through and hope it seemed authentic.

I am almost finished with a dark urban fantasy with a working title of “The Greenway”, and then I’m at work on sequel to the Six-Gun Tarot, with a rough working title of “The 32 Killers of Golgotha”.
Greenway is set in the present and I’m describing it as Raymond Chandler, John D. McDonlad and Jim Butcher mashed up with “The Story of O” and “Pulp Fiction”.
The Six-Gun Sequel deals with a historical tragedy, some of the most horrible murders in human history, teeth, cannibals, Pirates of the Barbary Coast, reanimated monsters and brawling angels.  It’s a children’s book (Hahahahaha).
Seriously, I am so thankful that people have enjoyed my little western town and want to visit that world again. I hope I have the chance to take people back to Golgotha many times in the future, and that continue to enjoy the trip.
__________________________________

R.S. (Rod) Belcher is an award-winning newspaper and magazine editor and reporter.  He has been a freelance writer for over a decade. He has written for local, state and international publications.

Rod has been a private investigator, a DJ, a comic book and game store owner and has degrees in criminal law, psychology and justice and risk administration, from Virginia Commonwealth University.  He has done Masters work on a degree in Forensic Science at The George Washington University, as well as worked with the Occult Crime Taskforce for the Virginia General Assembly’s State Crime Commission.

His story, ”Hollow Moments” is featured in the horror anthology Deep Cuts published by Evil Jester Press in 2013

Rod’s  first novel, The Six-Gun Tarot, was published by Tor Books in 2013.
He lives in Roanoke Virginia with his children: Jonathan, Emily and Stephanie, Three cats and two dogs 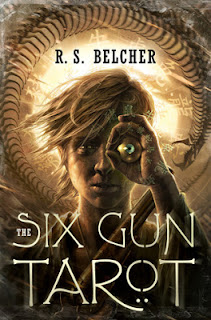 Nevada, 1869: Beyond the pitiless 40-Mile Desert lies Golgotha, a cattle town that hides more than its share of unnatural secrets. The sheriff bears the mark of the noose around his neck; some say he is a dead man whose time has not yet come. His half-human deputy is kin to coyotes. The mayor guards a hoard of mythical treasures. A banker’s wife belongs to a secret order of assassins. And a shady saloon owner, whose fingers are in everyone’s business, may know more about the town’s true origins than he’s letting on.

A haven for the blessed and the damned, Golgotha has known many strange events, but nothing like the primordial darkness stirring in the abandoned silver mine overlooking the town. Bleeding midnight, an ancient evil is spilling into the world, and unless the sheriff and his posse can saddle up in time, Golgotha will have seen its last dawn…and so will all of Creation.