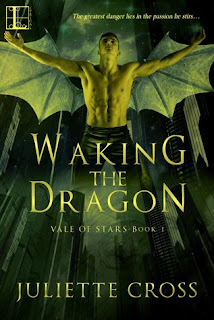 
The Gladium Province is on the verge of civil unrest as humans and Morgons, the dragon-hybrid race, clash once more. But amid disorder can also arise passion…


We get new characters in Cross's new Vale of Stars series, but we're also luck enough to get the old from her Nightwing series as well. Even though this is a new series and you COULD start with book WAKING THE DRAGON, I would highly recommend reading the Nightwing series first. There is a lot of back story and character development that you will miss if you don't and you might not really 'get' some things if you don't have that information going in.

Moira, who happens to be Jessen's sister from SOULFIRE, is all grown up and easy to like. She's an independent strong woman who's willing to get her hands dirty when looking for and writing her next story. Her sister and brother-in-law demand that she take help when she insists on discovering what is happening with the human woman that are showing up dead in Morgon territory. With Kol at her side that is what she does. I must say that I absolutely fell in love with Kol. When we first met him in WINDBURN it was clear that he was a broody bad ass alpha male like all the other Morgan men we have met and he confirmed that in WAKING THE DRAGON, but there is SO much more to him and the more I learned the more I wanted to read about him.

With lots of danger, romance and suspense WAKING THE DRAGON helps us dive deeper into the world that Cross introduced to us in her Nightwing series. I enjoyed the full book length that WAKING THE DRAGON brought us and look forward to seeing what comes next in the Vale of Stars series. Juliette thankfully is able to get us the books we love pretty fast, so we probably won't have to wait too long for book 2.