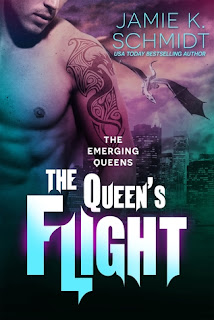 Viola Pierce has never had particularly great luck with guys. That is, until the day she shifts into a glorious, deadly, three-headed dragon. As it turns out, Viola is a dragon Queen. But when she's abducted by a greedy dragon who wants to breed with her, Viola begins to realize the dragon world is filled with betrayal, deception, intrigue, and danger...

As a rule, Sergei hates Queens, but Viola's beauty and humanity reach something deep within him. Something he should not be feeling. When she names him her protector and consort--quite by accident--Sergei has no choice but to accept. Now they are bonded for life...with a growing attraction neither of them could have imagined.

But the dragon court is ruthless...and what doesn't kill Viola will only make her more dangerous.


THE QUEEN'S FLIGHT gets started with a bang and it doesn't slow down from there. There is a ton of action, lots of danger and we get to see the couple from the previous book, which I always love.

Having said that, I don't feel that a new reader to the series really had the information they needed to really grasp what was happening in the beginning. For those that have not read the first book, they don't really know what it means that the main character is a Queen or why a male dragon would treat her the way they do and why they would try to keep her to themselves no matter her feelings. I am not one that wants to read a huge recap of a previous book, but those coming into the series for the first time probably needed that to truly enjoy the opening events. SO, I highly suggest any new readers to the series NOT start with THE QUEEN'S FLIGHT.

I hate to say it, but I didn't love Viola. I found her to be a bit of a doormat, some of her reactions didn't really resonate with me and on top of that, I didn't love her dragon form. I would have been ok with the 3 headed part, but one of her heads was a horse and the other was a goat. When I read that for the first time —which was in the first chapter— I was like.. Really? THAT is what she turns into? That was a little too odd for my tastes. Sergei on the other hand I liked pretty early on. He has a dark past, but he doesn't hide his feelings and I liked that.

I did enjoy the overall storyline of THE QUEEN'S FLIGHT. I wish I could have connected better with Viola, but I did end up liking her talents and the way she used them to find the missing Queens. Hopefully the next book's Queen will resonate with me more.