Review: The Outside by Laura Bickle 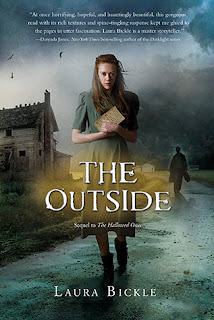 One girl. One road. One chance to save what remains…

After a plague of vampires is unleashed in the world, Katie is kicked out of her Amish community for her refusal to adhere to the new rules of survival. Now in exile, she enters an outside world of unspeakable violence with only her two “English” friends and a horse by her side. Together they seek answers and other survivors—but each sunset brings the threat of vampire attack, and each sunrise the threat of starvation.

And yet through this darkness come the shining ones: luminescent men and women with the power to deflect vampires and survive the night. But can these new people be trusted, and are they even people at all?

In this edge-of-your-seat thriller, it’s up to one Amish girl to save her family, her community, and the boy she loves . . . but what will she be asked to leave behind in return?


I absolutely adored THE HOLLOWED ONES, it was nothing like I thought it would be and so much better than I could have imagined. THE OUTSIDE follows Katie and her "English" friends after they were kicked out of her Amish community.

I continued to enjoy the characters. Katie does not change much but I liked her the way she was so that was no big deal. Alex was protective and loving and Ginger was a good companion. They journeyed long and hard and met other survivors along the way. I cried a few times but I'm an emotional reader so that is to be expected. There were a few odd parts in THE OUTSIDE. Without going into spoilers I will say that I think maybe because one was pretty religious and "miracle" like and the other was too alien for me. Was not impressed by those parts at all and they were big moments. There was plenty of fighting and danger with close calls keeping the characters on their toes.

The ending was OK. I was hoping for something a little more but it ended well.Overall THE OUTSIDE did not blow me away like book 1 did. It was still great but it just did not pull me in as much as I wanted it to.