UFI welcomes K.E. Shade Author of Muir Bhreatan. Thanks for Joining us!!

What can you tell my readers about yourself that they might not know from looking on your bio or reading in another interview?
I was an Army brat. My father served 22 years so up until 5th grade, we moved—a lot. My older brother got the brunt of it but amazingly, we all graduated from the same high school. It made it hard to make friends, knowing you were going to move away and the fact I was very shy didn't help at all. When we stopped moving, it was a scary time for me. I couldn't just start over and forget all the bad experiences in the last school. Luckily, I found a great group of friends who I'm still contact with after all these years.

What do you enjoy doing on your down time?
Beyond interacting with my three cats? Video games! I'm big on action/puzzle/strategy type ones so I've played every Prince of Persia and Assassin's Creed game. They're my favorite ones.

What is your Favorite part of writing?
Coming up with the ideas and expanding them. I have a notebook I keep to jot every one down. It's the imagination and daydreaming in those worlds that is so amazing.

Do you have any certain routines you must follow as you write?
Nope. I'm a panster. Even outlines sometimes are disregarded—if I bothered to make a detailed one. Sometimes I forget to make a document of characters and descriptions because I'm so into just writing.

What are some of your Favorite books or Authors in the Urban Fantasy/ Paranormal Genres?
Kim Harrison, definitely. I love her Hollows series and got the chance to geek out and meet her at the Virginia Festival of the Book in 2013.

How would you pitch Muir Bhreatan to someone who has not heard of it before?
I'd definitely start out with pirates. The lore behind that near mythical time in history fascinates most people. Then there's the story within. A man trying to do everything in his power to get back to the woman he loves.

Do you have a favorite scene in Muir Bhreatan?
The last scene with Kaitlin and Aedan before he sets sail again. She tempts him with her wares only to send him off without his supper, so to speak. It humbles and drives Aedan to rethink the life he's chosen and what his heart truly beats for.

Which character was your favorite to write about? What about the hardest to write about?
Kaitlin was the easiest. Her fiery temper and her way with loving Aedan with every inch of her soul. She's not a woman to be under foot. Daithi, Aedan's brother, was the hardest to write. He hasn't found love like Aedan but learns it soon enough. What ultimately happened to him was very difficult to write but necessary to the overall story.

What Other Projects can we look forward to reading from you?
I have several things going right now, more on the naughty side. A few twists on fairytales and a series of books set in a fantasy world I created. Those have some heavy-handed editing coming up to be ready to represent to my publisher.

K. E. Shade is multi-published author Kastil Eavenshade in disguise pandering her romantic shenanigans. When not catering to the whims of three rescued kitties, she's dreaming up her next heart-beating tale. No period in history—past, present, or future—is safe from the clutches of her muse. Her passions beyond writing are drawing, cooking, and watching Pittsburgh Penguins hockey. She credits her parents for her free spirit as they've always supported her in every aspect of her life. Without them, she wouldn't be here. 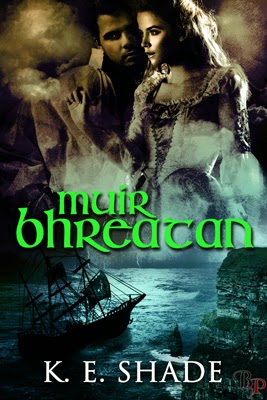 
Liberators of gold from the British on the high seas, Aedan O' Loinsigh and his brother have never shied away from a challenge on the open waters. Aedan's only tie to solid ground is the lovely Kaitlin who possesses him like no other. When the brothers are captured and awaiting execution, a mysterious man offers to free them if they pay off their debt aboard his ship. The brothers waste no time in agreeing to the proposal only to find their new lives are not much better than those of slaves. Desperate to reach Kaitlin again, Aedan must figure out a way to save not only the other indentured servants aboard the ship but get back to his true love. Salvation could come at a price. One that Aedan will have to live with for the rest of his life.

Aedan chanced getting closer to her and she closed the rest of the distance. The clear waters spared him no mercy at the sight of her swimming without one scrap of clothing. "Oh, lass. You tempt me."

"Always." She draped her arms around his neck. "Promise me ye will come back to me."

"With all my heart, Kaitlin, I promise I will be in ye arms again."

She smiled and kissed him boldly, her tongue breaking the barrier. Aedan kicked his legs to breach shallow water, his trousers growing tighter. The sand curled around his toes and he pressed her closer. Her hands wormed their way up his chest and she pushed him away.

"I have to go." She toyed with her bottom lip. Aedan smirked and reached for her, but she batted his hands away.

"Nay." He crooked a finger at her.

"But the men are waiting for me." As she backed away, inch by inch of her bare skin emerged from the lapping water. "I've volunteered to lead them back home."

Aedan waded toward her, but she stayed a hairsbreadth from his reach. His heart pounded in his chest as she halted with the water kissing her waist.

"The men can wait." Aedan brushed his fingers along her damp tresses.

"Can they?" She kissed his neck slow. Her fingers traced the outline of the scar a bullet had left behind over a year ago. "Must everyone wait but Aedan Ó Loinsigh?"

Salty air and the gentle touch of his love almost made her words drown in the warm feel of her kisses on his skin. Too many days at sea burned his lust, and his body yearned to join with Kaitlin. He raised her chin, eager for taste of her lips. She pressed her hand over his mouth.

"I will wait for ye. I will, always and forever. I love ye." Her hand moved away.