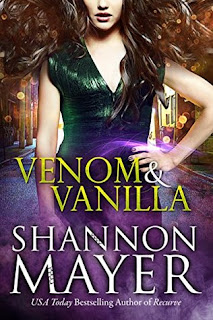 
Successful Seattle baker Alena Budrene doesn’t want to die. But when she’s infected with a lethal virus spread by supernatural beings, her only chance for recovery is to make a deal with the devil—or in this case, a warlock.

Though he saves her life, it looks nothing like the life she once knew—and neither does she. Alena is a new breed of “Supe” no one has ever seen before. Even the supernatural police don’t know what she is. Now exiled to the northern side of the Wall, which marks the divide between humans and Supes, Alena is thrust into a dark and magical new world.

But just as she begins to adjust to all things supernatural, she realizes that her transformation is the least of her worries—and it was no accident. She was chosen…to be killed by a Greek hero trying to make a name for himself once more.

Alena was brought up to be subservient, preferring creating to fighting, and vanilla and honey to blood. But that was then. Now, to survive, she must stand up for herself—and this time she’s got fangs. But will she be ready to use them?

I thought VENOM and VANILLA started off pretty strong. I instantly took to Alena and the storyline intrigued me. Then Alena was turned and both her and the storyline pretty much lost me. Did I hate either? No, but I had to force myself not to put the book down or jump ahead.

I think my biggest issue with VENOM AND VANILLA was that a lot of the situations and conversation felt forced and awkward and there were also a lot of over-the-top, "WTF, are you kidding me?" moments. On top of that I honestly cringed multiple times when some of the characters opened their mouths. I would compare some of their vocabulary to that of a prepubescent teenager and since this is an adult urban fantasy, that just didn't work for me. Now having said that, the main character is supposed to be wholesome and naive before turning into a 'super duper', so I understood some of the stuff she did and said, but it didn't stop me from cringing.

There is a lot left unanswered at the end of VENOM AND VANILLA. It is part of a planned trilogy, so I expect we will get answers in the next two books, but there were a few things that seemed pretty huge that weren't addressed by the end of VENOM AND VANILLA that make me want to pick up book two. I would normally give a book I felt this way about 2 stars, but I truly think that the Venom Trilogy has great potential and has a good chance of winning me back. For that reason I am bumping my stars up to a 2.5. Hopefully book two will prove me right and Alena's character will even out a bit and make me like her again.