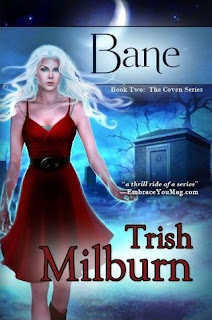 To protect those she loves from herself, Jax will leave them all behind.She’ll risk everything in a desperate search for answers.

Jax Pherson fled the darkest of covens and from her own father’s evil. For a brief moment, her courage was rewarded. She found everything she’d ever wanted. A normal life. An amazing boyfriend. An envy-worthy best friend.

But her past put them all in danger, forcing a confrontation with the dark covens. In a life-and-death battle to save those she loved from the covens, Jax gained staggering power. Power so intense, so dangerous, she fears the darkness that now dwells inside her like a living thing.

If she can’t control the power, she may yet become as evil as the witches she conquered.

With her cousin Egan, Jax leaves all she’s built and heads for the one place that might hold the answers she desperately needs to hold back the darkness—Salem, Massachusetts. Her research unearths a shocking discovery: the Bane, a secret group of witches dedicated to thwarting the covens.

Jax desperately needs their help in her fight against the covens, but finding the Bane is easier said than done and takes all her skills and courage. As Jax gets closer, her dark powers began rise and control her actions. If she succumbs to the darkness, Jax may have as much to fear from the Bane as the evil covens and the determined hunter on her trail.


BANE starts up immediately after the events of WHITE WITCH with Jax and Egan leaving their new life in the middle of the night to save those they love from harm. The jump right into researching their families pasts and looking for help in Salem. They quickly learn they are not alone in their pursuit to fight the covens.

Jax's voice continued to be a great base for the story. She was easy to read and her emotions and feelings were always out there. I liked the new characters that were introduced and the old that came back into the story. The progression of events made sense and kept me reading. BANE was pretty fast paced but didn't feel like it jumped as much as WHITE WITCH did. There was a good amount of action spaced in. I enjoyed the setting of Salem throughout the book and the little facts that were thrown in.

BANE ends with another abrupt, cliff hanger ending which once again did its job with making me want to read what happens next with the characters.