Guest Blog + Giveaway: Sins of Long Ago by Naomi Bellina

UFI welcomes Author Naomi Bellina. Thanks for Joining us!!

What super power would you chose?

Let's pick a super power. Do you remember playing that game when you were a kid? Okay, a few of us still play. Several times a day, sometimes. Is that bad?  ☺  So let's see, what would I select if I were suddenly granted a choice? How about super strength? It would be cool not to have to ask for help opening pickle jars, and be able to leap over tall buildings. Invisibility? Nah. I can't really think how I'd use it except to spy on people now and then. Mind reading? Same thing. Honestly, I don't really want to know what most people are thinking. What about some of the cool powers, like the X-men have, to be able to freeze objects or whip up a storm, or start fires?

I think I'd chose the power of flight. Best reason? To avoid airport security! I'd be able to visit my family out of state more often. It would give a whole new meaning to the drop in visit, 'cause I'd land right on the roof!

Vincent and his werewolves have power. They're strong, healthy, and as Gen finds out, wicked good in bed. Not really super powers, but these guys have a butt-load of fun and use their talents to help others.

Naomi lives in sunny Florida with the love of her life and a magical calico cat. She writes for various fiction and non-fiction markets but is drawn to romance because her characters insist on canoodling and falling in love. So she lets them. Her interests include dancing, motorcycle riding, drumming and creating healthy meals. She takes the opportunity to play whenever possible.

Her motto:  Never pass up the opportunity to have an adventure! 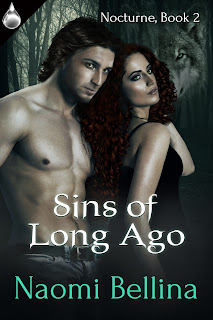 Leading his pack of werewolves keeps Vincent plenty busy, and now with a predator out to harm them, life is more perilous than ever. The last thing he needs is a woman to complicate matters, especially one who sets his body and soul on fire. She's a human and a witch — totally the wrong woman for him. Even if he could take a mate for his own, he refuses to put her in the danger his life has become. No way can they ever be together. Werewolf-style love is fine anyway. No permanent partner, no bullshit, no heartache.

Genevieve has never known true love. Cursed by an enraged woman long ago, females in her family are doomed to go insane if they fall in love. Life has been fine without a man around-- until a hot werewolf drops in and captures her heart. Though they have plenty of obstacles to overcome, Gen knows they can work past them. Tell that to Vincent, as he struggles with old pack rules about love, sex, and consorting with humans.

As Vincent searches for a killer, deals with death among his own, and tries to keep his hands off Gen, she attempts to end her family curse. Together, they must find a way to break free from the sins of long ago.


Excerpt #2 (Rated PG):
Lying in bed with a pleasant wine buzz, she was almost asleep when the sounds of Sally and Greg making love pulled her back to consciousness. She smashed the pillow over her head, but it was no use. Passionate moans filled the air, reminding her of what she’d almost had hours before. Gen tossed and turned, twisting the sheets into a knotted mess. Her skin still smelled of wood smoke, even after a shower, and she could swear the faint aroma of Vincent clung to her body too
The noise finally stopped but, wide awake now, Gen pulled out her phone to read a book, hoping to lull herself back to sleep.
Nope. After twenty minutes of reading, her brain refused to quit. The more she thought about her present situation, the angrier she became. Though it had been brief, the intensity of passion she and Vincent had ignited burned like the embers in the fire. Screw it. Some asshole had spoiled her evening; she’d be damned if she would let him ruin the rest of her night. Her heart and her body demanded satisfaction. She got out of bed, dressed quietly, grabbed her things, and crept down the stairs to call Vincent. He answered on the first ring, and she spoke in a low tone.
“I know this is silly, but…”
“I’ll be at your place in ten minutes.”
“What? Ten minutes? Where are you?”
“I just left Nocturne. I took a sniff around, watched your shop for a while to see if the robber would come back, then went to your apartment to look around. Go to your place. If you get there before me, wait outside in your car, don’t go in.”
“You’re being mighty presumptuous. You don’t even know what I want.”
“I know what you want.” His deep voice sent the same intensely pleasurable shudder through her body his thumb on her cheek had earlier.
“I’ll be there soon.” Two hours. He’d hung around Nocturne for two hours. For her.
She found a piece of paper and started to scribble Sally a note. What could she say? Got horny and left? Thanks for the wine and movie? The kitchen light flicked on, and Gen jumped.
“Hey, Sally, just getting ready to write you a note. I’m going to…”
“I know where you’re going. You’re going to hook up with your hot man.”
“Uh, yeah. How did you know?”
“The way you two looked at each other. I could have fried an egg on your head. Why didn’t you just stay with him tonight?”
“I thought it would be presumptuous to ask and anyway, we don’t know each other all that well. I don’t know how he feels about me.”
“Are you kidding? That wolf has it bad for you. He’d walk across broken glass to get some of your lovin’.”
Gen’s mouth fell open. “You know he’s a werewolf? How do you know that?” Her eyes narrowed. “You’re some kind of magic woman, aren’t you?”
Sally laughed. “Yes, I am kind of magic. I’ve got this weird telepathy thing, where I can read other people. I keep it turned off most of the time, but I did a quick scan of Vincent in your shop. He sent out powerful vibes, and I wanted to make sure he was safe for you. I’m sorry. I didn’t mean to violate your privacy.”
“No problem, I guess. What did you pick up from him?”
“He’s wildly crazy about you. He might not even know it yet, but he is. Then I saw his wolf side, trying to get out. He’s got control, but the animal is there, right beneath the surface.”
Gen shifted her feet around. Crap. Did she just get Vincent in trouble? “You can’t tell anyone, about him. Promise you won’t.”
__________________________________
Tour Wide

Owl and the City of Angels (The Adventures of Owl #2) by Kristi Charish
Ward Against Destruction (Chronicles of a Reluctant Necromancer #4) by Melanie Card
Wicked Ever After (Blud #4) by Delilah S. Dawson