Will you be the MetaWars Megawinner for Urban Fantasy Investigation?

Urban Fantasy Investigations is thrilled to celebrate the publication of Book 4 in the Metawars superhero series, 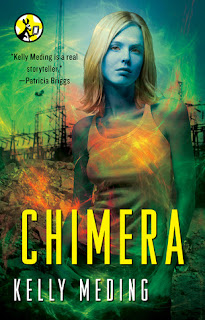 A mysterious and dangerous conspiracy deepens, threatening the superpowered Rangers and pushing Flex to join forces with one of her team's mortal enemies: a Bane called Chimera.


Growing up with blue skin never made Rene "Flex" Duvall feel like at outcast. She learned early on to put people at ease with her wit and exuberant personality. So she's certainly not going to let her façade crack when she and her teammates suddenly face a new breed of genetically manipulated and brainwashed Metas: the well-trained teenage criminals known as the Recombinants.

When a desperate battle leaves one of their friends wounded, Renee and Ethan follow a clue to Manhattan Island, where the Banes have been imprisoned. There they find a Bane named Chimera, who refuses to cooperate despite possessing information that could help them stop the Recombinants. Chimera's emotional scars are as devastating as Renee's physical scars, and soon the two find common ground in shared pain. Against her better judgment, Renee forms an alliance with this Bane. They both can gain much from working together, so the only question is who has more to lose by cooperating . . .

Enter to win the entire EBook MetaWars superhero series this week!  (PLEASE NOTE, DUE TO TECHNICAL CIRCUMSTANCE, THE PROMO CODES FOR DOWNLOAD ARE NOT COMPATIBLE WITH KINDLE.)  One winner for Urban Fantasy Investigations will be announced November 15th! 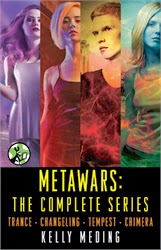 In addition to entering to win on this site, you can also enter on the other four MetaWars Megawinner sites (each megawinner can only win once!):