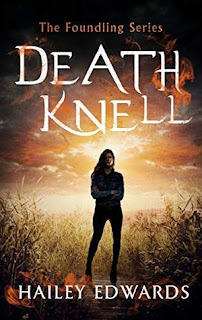 
Luce is back in the third book of The Foundling, the bestselling fantasy series perfect for fans of Shannon Mayer, Jenn Stark and the Sookie Stackhouse novels

War burned her. Famine nearly killed her. Now Death is at her heels.

After her two worlds clashed apocalyptically, Luce Boudreau needed some time out. But Destiny had other ideas. When bodies begin washing ashore down the Mississippi River, Luce discovers they are part of a gruesome, lethal message. Her final sister, Death, is trying to break through.

Every sign is clear: the end is coming, but earth will be destroyed - quite literally - over Luce's dead body, even if that means she'll be battling her own nature. And her coterie will stand with her, though Cole keeps standing one step too goddamn far away. Her mysterious new partner, Adam Wu, on the other hand, seems determined to keep her close at all times. And the more Luce learns about the new world she's part of, the deeper the secrets go. Who - if anyone - can she really trust?

As the final pieces of an ancient war come together, Luce's chance to fight back comes sooner than she expected. Death can come at her . . . she's eager to return the favour.

'An inventive and multifaceted world with serious heart and one hell of an emotional kick, this is a series that needs to be on your TBR' Bookish Em


There was a lot revealed in DEATH KNELL, but there is still so much to learn.

I'm really enjoying the characters in this series. Luce doesn't just sit back and let others take care of things and those around her are protective, but know she's a bad-ass as well.

I love a slow burn release of information, but I feel like the slow burn in this series has been a little too slow. I need a little more with each book or my frustration will ruin my enjoyment at some point.

The relationship between Cole and Luce is really frustrating in itself, but the developments in DEATH KNELL kinda threw me. I can't say more without revealing a spoiler, I just can't decide if this huge development is something I will be able to get into or not. Next book will definitely tell me.

I'm still upset about the rift between Luce and Rixton. I really want there to be a way that she can tell him what is going on and they can be in each others lives. I know she is trying to protect him and his family, but I really don't like it.

DEATH KNELL wasn't my favorite installment of the Foundling series, but I'm still hooked enough to want to know what will happen next.