Review: Winging It by Deborah Cooke 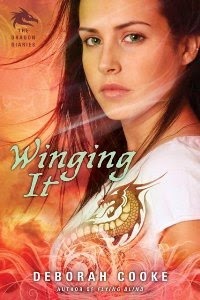 Zoë Sorensson yearns to come into her powers as the only female dragon shifter. But being part of two worlds is more complicated than she expected. It’s bad enough that she’s the target of the Mages’ plan to eliminate all shifters—she also has to hide her true nature from her best friend Megan, a human. For her sixteenth birthday, all Zoë wants is one normal day, including a tattoo and a chance to see hot rocker Jared.

Instead, the Pyr throw her a birthday party but ban Megan from attendance, putting Zoë in a tight spot. Things get even worse when Zoe is invited to the popular kids’ Halloween party and Megan’s left out. Zoë knows the party is a trap laid by the host, an apprentice Mage. When Megan gets a last-minute invite, Zoë must save the day—and her best friend—without revealing her fire-breathing secrets . . .

If you are new to the series you should definitely pick up book 1 as there is some great character development to help you get to know all the characters but Deborah does a really good job of recapping in the first chapter of WINGING IT so you wont be to lost if you decide to jump right it. The recap was helpful to catch me back up on the series.

The book moves along at a nice speed and never leaves you feeling like something needs to happen.  I enjoyed the action and conflict in FLYING BLIND but WINGING IT brought a more grown up Zoe with to go along with the action, conflict and fun supporting cast characters to liven up every situation.

Megan, Zoe's Best friend plays a much bigger role in book 2. We get to know her better and watch as Zoe tries to hide the truth that she so desperately wants to let out. We meet a new guy and I really liked him. We got to know Jared in FLYING BLIND I have so many questions about him and still so little answers. He is never there for Zoe when she needs him in WINGING IT and Derek was able to squeeze right into the spot that he should have been in. I still feel like Jared has a huge chance but unless he jumps in to the mix in a big way I think he will be done for in Zoe's world. I enjoyed watching the young dragons continue as a team to get past the major conflict in book 2. I'm hoping book 3 brings them all back together again.

The Dragon Diaries was planned as a trilogy with the final book BLAZING THE TRAIL set to release in June of 2012 and I hope I am able to snag it as soon as its off the press so I don't have to wait that long. Great series for any Paranormal YA lover.

The Winners chosen by Rafflecopter is.....
Read more »
Posted by StacyUFI at 2:59 AM No comments: