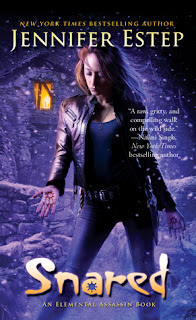 I stopped in front of a photo of Maria Rivera, a beautiful woman with long, golden hair, brown eyes, and red lips. In the photo, she was smiling and standing in between Damian and his father, Richard Rivera, with a dour-looking Bruce Porter hovering behind them in the distance. I raised my phone and snapped a shot of the picture—

“You’ve been in there a while now,” Finn’s voice sounded in my ear. “Does that mean you’ve finally found something good?”

“What kind of liquor?” Finn chirped with obvious interest. “Anything I would drink?”

I slid my phone into my jacket pocket and eyed the rows of gleaming bottles behind the bar. “Oh, I think that you would drink it all, especially since Rivera’s tastes are even more expensive than yours. Why, you would cackle with glee if you could see all the spirits he has in here.”

“Well, why don’t you bring me a bottle or two so I can cackle in person?” Finn chirped again. “I might as well get something from standing out here in the cold.”

Even though he was in the woods outside and couldn’t see me, I still rolled my eyes. “I came here for information on the Circle. Not to pilfer daddy’s booze like some naughty teenager.”

“You say potato, I say opportunity.”

I started to respond when a faint creak sounded in the hallway outside, as though someone had stepped on a floorboard. I froze. The creak came again, louder and closer this time, and it was followed by something far, far worse—the distinctive snick of a key sliding in a lock.

“Let’s have a drink,” a faint, muffled voice said.

Drakon's Prey (Blood of the Drakon #2) by N.J. Walters