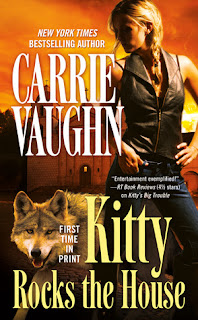 On the heels of Kitty's return from London, a new werewolf shows up in Denver, one who threatens to split the pack by challenging Kitty's authority at every turn. The timing could not be worse; Kitty needs all the allies she can muster to go against the ancient vampire, Roman, if she's to have any hope of defeating his Long Game. But there's more to this intruder than there seems, and Kitty must uncover the truth, fast. Meanwhile, Cormac pursues an unknown entity wreaking havoc across Denver; and a vampire from the Order of St. Lazaurus tempts Rick with the means to transform his life forever.


There is a good amount of drama and conflict in KITTY ROCKS THE HOUSE. Between Kitty having to deal with her sister, a wolf trying to take over her pack, Rick going missing, her talk show and a few other small things she doesn't have much time to sit and relax. But when does she ever? Book 11 kept a nice pace going with plenty of action and suspense to fill the pages. We get a nice amount of pack time in book 11. Kitty is always looking out for her pack and what is best for them so when someone comes and tries to take over she looks at the situation on all sides to decide what would be best for everyone. I loved the way she handled it all and it really shows you how wonderful of a person she is. She ends up realizing some things about her self that will help make her a better alpha in the future. I am so disappointed in Rick!! I know he is having hard time but I can't help but feel he is being a tad bit selfish for what he did in KITTY ROCKS THE HOUSE. Hopefully he will have a chance to redeem himself in a future book.

Vaughn has brought us another great addition to the series. The long game continues to get bigger and the allies continue to come forward. KITTY IN THE UNDERWORLD comes out at the end of July so we don't have long to wait to see what will happen next for Kitty.