I work full-time in addition to writing. It’s like having two jobs, one that I love and one I tolerate.

I love going to the movies. Nothing replaces the big screen for me. Watching movies in your living room doesn’t give you the same feel as seeing it huge, especially movies like the Avengers or Star Trek and Star Wars.

Making stuff up which is calming to me as I tend to think too much.

I wouldn’t say I have any certain routine. I almost never edit until I’m done with the first draft of a MS.

My favorite authors are J.R. Ward and Gena Showalter.

How would you pitch Her Black Heart, book two of the Dark Amulet Series to someone who has not heard of it before?

This book is about a girl who is murdered for an amulet she possesses. She’s obsessed with getting it back at any cost, even death doesn’t stop her. A fallen angel is sent to help her find the people who stole it from her, except she and the angel have different agendas. Oh, and they are hot for one another.

Can you tell us a little bit about the world that the Dark Amulet Series is set in?

The books take place is my version of Heaven and Hell and on Earth, so far in Detroit and Chicago. I’ve only seen a small part of Arcadia (Heaven), where the angels live. The place where humans go after their death is forbidden to enter for most of the angels. Hell or Netherworld is hot and nasty. However, the natives of the realm have a cooperative society, so there is no jealously among them or a competition for control. The natives leave that to the current Ruler.

Do you have a favorite scene in Her Black Heart?
There is a scene where the main characters have a turning point in their relationship in the woods. Here’s a little tidbit. I don’t want to give too much away.

“She’s gone,” Raz said.
“Great. You chased her away.” She threw her hands up. “I hate you.” They were half an arm’s length away from one another.
“No you don’t.”
“Yes. I. Do. I could kill you.”
“Do what you have to.” He slipped his hand around the back of her neck and weaved his fingers into her hair. The fire in his eyes lit like mini torches. Her lips parted and he licked his lips.
“You’d like that, wouldn’t you? Stop looking at me like that. I hate you.”
“Like what?”
“Like you want to either kill me or sex me up.” He smashed his lips to hers, the kiss a juxtaposition of reverent and demanding. They remained fused together as he backed her into a wide-trunked tree.
“Maybe it’s both,” he said against her mouth.

I’m currently working on the third book in the series and I’m struggling with writing the heroine. See doesn’t like to cooperate, very frustrating for me and the hero. My favorite is a demon that stutters. He’s killed a few people in the third book but he’s loveable and my favorite. 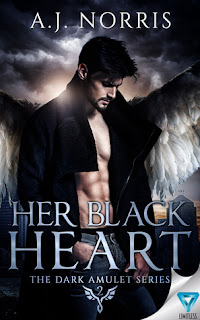 
Julia Dunham is a monster. Her heart has been consumed by an amulet meant to create terror…

As a young girl, Julia received an amulet tainted by Abaddon, the Supreme Demon of the Netherworld, and the sigil slowly corrupts her heart. The power of the deceptive pendant gains the attention of her former employer, Maurice. He sends thugs to murder Julia and steal the amulet.

Immediately upon her death, Abaddon traps her on Earth, leaving her obsessed with retrieving the amulet. Julia must find a way to overcome her deadly obsession or be responsible for unleashing thousands of demons on humanity.

Ra’zael the Guardian fell for the wrong girl and lost his wings. He isn’t about to let it happen again…

Ra’zael is tasked with the mission of helping Julia overcome her compulsion to locate the amulet, though he’s reluctant to get involved. But as a fallen angel, he doesn’t have much choice—it’s the only way to earn back his wings. His fall from grace is still fresh in his mind, but despite his best effort, his passion for Julia can’t be ignored. He has to save her from herself.

Julia must make her own choices. Redeem herself or condemn Earth and her soul forever…

Despite Ra’zael’s warnings, Julia tracks Maurice and the amulet to Chicago. She has every reason to kill Maurice. He murdered her. He stole from her. Spending eternity in the Netherworld might be worth watching him die.

Ra’zael knows she still has goodness left inside her…he’s seen it. Julia just has to find it and fight the evil of…

“What am I going to do with you?” he’d said.
Julia could think of a lot of things Raz could do to her. “You can do anything you want to me.”
Ra’zael smiled and looked heavenward. A heady chuckle left his throat. “Anything? You may want to reconsider that statement.”
All sorts of scenarios danced around inside her mind, things involving rope and leather. Fantasies, yes, but fun to think about. “Uhhh…”
“Yeah, that’s what I thought.” The angel laughed quietly. She eased back into the seat and decided to change the subject; after all, he’d just taken her virginity. No sense in being greedy.
“Why are your wings gray?” she asked. “Do you have Abaddon’s poison in you?”
“Taint. I never allowed him to kiss me, and as far as I know he didn’t.” He shrugged. “Wings get dingy for lots of reasons. Probably because I was in Netherworld so long. I did bad shit.”
“Yeah, but to bad people, right?”
“Mostly.”
“Like what?”
Raz made an aggravated sounding growl. “Arghh…Julia. What’s this obsession you have with wanting to know the specifics? I thought I was a demon and acted accordingly.”
“Just curious.” She shoved her hands inside the front pouch pocket of her sweatshirt. The wad of cash from the Demon Ruler burned her palms. Julia took deep breaths as guilt panged her black heart. She focused on Raz’s chest and tried to match his breathing pattern—steady and rhythmic. Only his inhales and exhales were too long and the train car started spinning.
“You all right?”
Her head bobbled. “Hm…wha…”
“I asked if you were all right.”
“F-Fine…don’t I l-look all righ…” Julia’s words slurred and trailed off.
She woke up cradled in his arms. For someone who didn’t like to be touched, he certainly did a lot of touching. Not being able to resist, she reached up with her hand to cup his cheek. He veered his head away.
“Don’t,” he snapped.
Her bottom lip quivered. Why did she care? She was a monster.
He looked over his shoulder at the chair next to him. “Sorry,” he mumbled.
“What was that…that sounded like an apology,” Julia said softly. He guided her head to his chest and she sighed.
“What’s going to happen after we find the amulet?” My amulet.
“What do you mean?” he asked and relaxed his head back on the seat. “Let’s worry about getting the necklace back first then we’ll talk afterward.”
I can’t talk later; I have to kill you.