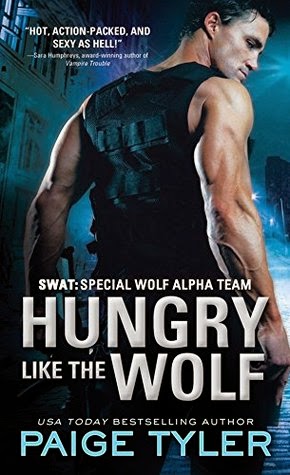 
INTRODUCING SWAT: SPECIAL WOLF ALPHA TEAM
They're tight
They're on target
They're as alpha as men can get.
The Dallas SWAT team is hiding one helluva secret . . . they're a pack of wolf shifters.

The team of elite sharpshooters is ultra-secretive—and also the darlings of Dallas. This doesn't sit well with investigative journalist Mackenzie Stone. They must be hiding something . . . and she's determined to find out what.

Keeping Mac at a distance proves impossible for SWAT team commander Gage Dixon. She's smart, sexy, and makes him feel alive for the first time in years. But she's getting dangerously close to the truth—and perilously close to his heart...


HUNGRY LIKE THE WOLF was not hard to get into. Take a bunch of sexy wolves, make them an awesome SWAT team and I will read it any day. Thankfully there was more to the story than that, but come on, sexy SWAT wolves? You know you want to pick this book up just for that reason alone.

Mackenzie is an investigative journalist and she has her eyes set on exposing the SWAT team. She knows there is something going on there, has no clue what, but she knows it will make a great story and she can't wait to tell it. I liked Mac. She is a go-getter and I liked that about her. There were a few things about her that also bugged me though. BECAUSE she is a reporter she has this, I must tell the public way of thinking and I really wanted to smack her around a few times for that.  The public doesn't need to know everything, especially when you ruin a good people in the process. Gage is the leader of the Dallas SWAT team and boy does his team catch your attention from the beginning of HUNGRY LIKE THE WOLF. He wants to keep his pack safe, so when Mac starts sniffing around, he has to figure out how to make it seem like he's not hiding anything while also keeping her at a distance.

The romance between Mac and Gage is pretty hot, there is instant attraction, lots of dodging feelings, and lots of steam produced when they finally give in. I really wish there was a little more wolf going on. We know that the team is full of wolves and they definitely act like wolves, but we don't actually get the wolf moments you might be expecting going in. As for the story. OK, so I will admit there wasn't a lot of mystery to the storyline. Things were a little predictable, but it was still very enjoyable. There was a nice pace and flow to the story and there is PLENTY of action.

The introduction kept it's promise. The Special Wolf Alpha Team is tight, they are on target and the men are definitely as alpha as they come. I have enjoyed Tyler's X-Ops Series so far and now I can't wait to read the next book in the SWAT series, I think I am going to have to branch out to Tyler's backlist and read some of her other series as well.

* This book was provided free of charge from NetGalley in exchange for an honest review.
Posted by StacyUFI at 3:00 AM 3 comments: