UFI welcomes Author Mariah Ankenman. Thanks for Joining us!!

I was raised by a professional clown. We have a family photo of us all in our clown costumes.

Playing my ukulele, crocheting, scrapbooking, and hiking when the weather is nice.

Plotting. I love putting a story together, the high you get when all the pieces just fall into place. It’s magic.

I always plot out a book before I start writing. Right now, I have two kids ages 5 and 2 so I have to wait until after bedtime to write. Plotting out where the story is going helps me avoid writers block since I have a limited window in which to get my word count.

Cynthia Eden is my go-to for Paranormal. Kim Harrison’s Hollows Series is one of the best I have ever read. I also enjoy Katie Reus, Kerrelyn Sparks, and Adrienne Bell. There’s a lot more, but then this interview would go on for days ;)

How would you pitch Daemon Deception /The Daemon series to someone who has not heard of it before?

The things that go bump in the night are real. Hidden in our world is another, one of darkness and shadow. There lie the monsters and the saviors, fighting a never-ending battle for the fate of the world, a battle that has been waging since the beginning of time. Unbeknownst to the humans, their souls are being hunted by the evil Kakodaemons, but the benevolent Euadaemons work day and night to keep back the Kako horde. Only now, the Kako’s have a secret, a new power tipping the scales toward darkness. It’s up to the supernatural council to discover and destroy this new power, before it’s too late for humanity and the world.

Can you tell us a little bit about the world that Daemon Deception/the Daemon series is set in?

Do you have a favorite scene in Daemon Deception?

I love the scene in Clem’s metaphysical shop. No spoilers, but let’s just say I love “first” moments.

Krista, in Daemon Reckoning (the third and final book in this series, due out later this year). I loved her spunk and willingness to fight back. She’s so positive through all the devastation life throws her way.

Kayla from my Peak Town, Colorado series was the hardest to write because she is a teacher. She’s very calm and patient, basically the opposite of me.

Daemon Reckoning the third book in the Daemon series will be out later this year.

Since 2016 Mariah has published seven books and doesn’t plan on stopping any time soon. Whether she’s writing hometown heroes or sexy supernaturals, Mariah loves to lose herself in a world of words. Her favorite thing about writing is when she can make someone’s day a little brighter with one of her books. 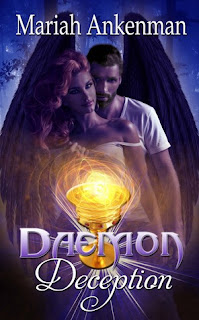 
As a witch, and one of the smartest scientists around, Celia’s job is to help the Enforcers defeat evil. Her latest task is to decipher the new language of the Kakodaemons. It should be easy, but she finds it nearly impossible with the demanding, frustratingly attractive council head breathing down her neck.

Euadaemon Damien has been called tough, but he’s tasked with protecting the innocent and war is brewing. He recruits Celia Dahl. Though he needs her brain, he finds much more about the sexy woman appealing.

As they work together, they find themselves engaged in more than just a working relationship. But even those closest can hide dark deceptions. Celia and Damien discover sacrifices must be made if there is hope for humanity and love.


“What do you need?” he asked, once he reached her side, bag in hand.
“There’s a vial inside. A potion I made to lessen the effects of the blood curse. I took one before I broke the spell, but I’m not sure it did much good.”
As horrible as her wounds were, he suspected her potion did help. If Racine’s account was accurate, the blood curse could have been a lot worse. “This?” He held up a glass tube with blue liquid inside, so bright it almost glowed in the dark room.
“Yes,” she panted, clearly in pain. “Pour it directly onto my wounds.”
He hesitated. “Will it hurt?”
She managed a small shrug. “It can’t hurt any worse than it does now.”
If he ever discovered the Sorcerer who created this blood curse, he would put him or her in the ground. After he made them bleed, a lot. Removing the stopper, he tipped the vial over her wounds. The blue, shimmering potion dropped into the deep gashes and started to bubble. Celia sucked in a sharp breath.
“Does it hurt?”
She giggled. “No. It tickles.”
Odd, but better than hurting. If he had his way, Celia would never feel any pain again.
He watched in amazement as the potion bubbled and sparked. Before his eyes, her wounds started to shrink. The skin began to knit itself together. In just a few short minutes, those deep, raw cuts reduced to three long, thin scars. The skin remained red and tender, but the wounds had closed.
“Wow.”
“Did it work?”
“Baby, you are one amazing Witch.”
A smiled tipped her lips as her cheeks tinged a tempting pink. She rolled to her side, then winced and rolled back.
“Well, it’s better. That’s a start. I guess I’ll have to sleep on my stomach tonight.” She frowned and he found the expression adorable. “I hate sleeping on my stomach. I can never fall asleep that way. It’s so uncomfortable.”
He stood and started to unbutton his shirt.
“Damien?”
He didn’t answer, just continued to undress until he was down to his boxers. Then he slipped into bed with her and pulled her onto his chest.
“There. Better?”
She buried her face in his chest. “Much.”
Careful of her back, he wrapped his arms around her and immediately realized his mistake. Celia was naked. He’d removed her clothes himself, but had been too distracted by her wounds to notice or appreciate her nudity. He noticed it now. Silky, soft flesh pressed against every inch of his body. Her firm breasts smashed against his chest, and he felt her nipples begin to harden. One leg draped across his groin, moving slowly back and forth. Yeah, he noticed all right. If the rising tent in his boxers was any indication, he appreciated it, too.