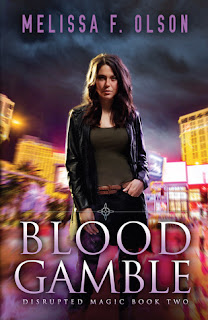 If there is one city that Scarlett Bernard hates, it’s Las Vegas. But when the cardinal vampire of Los Angeles convinces her to go investigate a new vampire-themed stage show, Scarlett quickly finds herself shoulder-deep in sequins, slot machines, and Old World intrigue.

The show’s creators are vampire celebrities Arthur and Lucy Holmwood, who once inspired characters from the original Dracula. Now, however, they have no qualms about announcing their true status to the human world, endangering the secrecy of the Old World and Scarlett’s mission to keep it hidden.

But before she can begin untangling the Holmwoods’ motives, Scarlett also discovers that their new production has attracted more than just fans: Las Vegas’s many vampires are suddenly disappearing, and rumors are flying that actual vampire hunters may have followed Arthur and Lucy to town.

Now, without her allies, her bargest, or her frequent partner Jesse Cruz, Scarlett must navigate a new underworld of secrets and murders in a city where nothing is ever as it seems. And the stakes have never been higher.


Scarlet saves the day again, but was the cost of it worth it? I love the both the characters and the world that the Disrupted Magic world is set in.

So much happens in BLOOD GAMBLE. I shouldn't have been shocked at the way that Scarlet found herself being sent to Vegas, but I still was. Las Vegas was interesting, but none of Scarlet's usual allies were with her. I enjoyed meeting new friends, but I missed having some of the oldies along for the ride.

I really enjoy how Olson continues to connect her various series together. I do wish we would get more of Lex besides the small appearance from book one and the phone call from BLOOD GAMBLE though. She is such a great character and I miss her adventures.

BLOOD GAMBLE was fast paced and full of action. The storyline introduced some new aspects into the world. The ending **eyes popping out of my head** "Say WHAT???" What a bomb to throw in at the last minute. There is no way that I won't pick up a copy of book 3 with that ending.