Review: The Beyond by Chloe Neill (@chloeneill, @BerkleyPub) 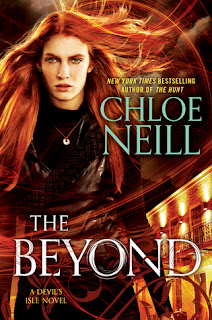 
Sensitive Claire Connolly must journey to another world in the electrifying fourth installment of Chloe Neill’s post-apocalyptic urban fantasy series.

It’s been a year since the Veil between the human world and the world Beyond was torn apart, and war began again. Sensitive Claire Connolly and bounty hunter Liam Quinn have been helping their human and paranormal allies fight back against the ravaging invaders and save what’s left of New Orleans.

But a new enemy has arisen, more powerful than any they’ve seen before, and even Devil’s Isle cannot hold her. . .

When Claire learns of a new magical weapon–one built by paranormals themselves -she knows it could turn the tide of war. But to reach it, she and Liam will have to cross into the Beyond itself. In a world full of hostile magic and dangerous foes, she’ll have to channel the powers she once kept hidden in order to survive. New Orleans hangs in the balance, and the storm is growing closer . .


THE BEYOND felt final and that is how I like to end a series.

I fell like all of the characters have grown since they were first introduced throughout the series. Not only individually either, they have grown together as well. I enjoyed meeting them and watching them become who they end up as. I do wish that a few characters would have had a bigger role in the final, but I am still happy with where they ended up.

Claire and Liam have been through a lot in their relationship and although they still have some issues, I felt like they finally got on the same page with things and and in a good place by the end of THE BEYOND.

THE BEYOND finally takes us behind the Veil. I won't give anything away by telling you about it, but we finally get to see it. There was a ton of action involved in the final book. Just when something goes right, something else seemed to go wrong.

I was left content at the end of THE BEYOND. I felt like all the links were connected, questions were answered and story lines were complete. I would read more in the world if Chloe Neill decided to expand, but I was happy with how the Devil's Isle series ended.