USA Today Best Selling Author, Alanea loves reading almost as much as she loves writing. She began writing at a very young age, some of her first scribblings are treasured in a keepsake box and written in green marker. She started when she was still in grade school and continued on through college.
She believes that love truly conquers all and that everyone no matter what, deserves a chance at that love and a place they can call home. She absolutely loves to hear from her readers so don’t hesitate to reach out to her. As always, her promise to her readers remains, “If you keep reading, I’ll keep writing!” 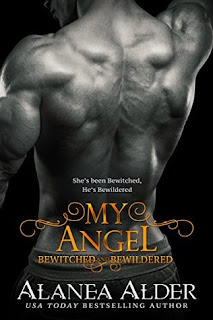 My Angel
Bewitched and Bewildered #9
Amazon


Vivian Mercy has been running from the past for so long she doesn’t know any other way of life. When a panicked call comes from one of her only friends she finds herself returning to the city of her nightmares where her dedication as a doctor and resolve to help others is put to the test.

Etain Vi’Aerlin has been watching over Noctem Falls for centuries. Sent by his queen he became a silent sentinel in the shadows helping Magnus whenever he could. While the sickness around him claims more lives he discovers what it feels like to be helpless, as an ancient warrior he doesn’t have the skills to fight this unseen enemy.

At any other time finding a mate would be cause for celebration, but Etain wants Vivian as far from Noctem Falls as possible, unfortunately, as the only doctor with an intimate knowledge of diseases she has to stay in the city, and finds herself working tirelessly to discover a cure in the middle of the deadly chaos sweeping the levels.

As Vivian’s past is revealed she finds herself not only combating the terrible virus but also the rebellious faction of the Founding Families. Etain vows to stand by her, even if it means abandoning the post assigned by his queen.

It’s a race against time to unravel the lethal secrets the virus is hiding before the city itself is lost forever.

“Do we want to know?” Dimitri asked.
Kendrick shook his head. “Honestly? Probably not, stay dumb and happy.”
Viktor gave Kendrick a dirty look. “Are you always like this or do you have something against vampires?”
Kendrick thought about it a moment. “No, I’m pretty much always like this, no offense,” he smiled at them brightly. The warriors scowled at his flippant response.
Godard eyed Kendrick. “Since you are a member of the Alpha Unit, maybe you should come train with us tomorrow. That is, if your soft archivist hands can stand getting a little dirty,” he teased.
Kendrick gave him an evil smile and rose to his full height. He stood nearly half a foot over them. “You will find that I am not as easy to manipulate as two certain innocent witches. I look forward to seeing you first thing in the morning.”