Review: Dead on the Delta by Stacey Jay 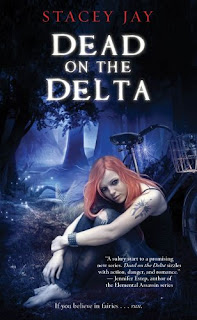 
Once upon a time, fairies were the stuff of bedtime stories and sweet dreams. Then came the mutations, and the dreams became nightmares. Mosquito-size fairies now indulge their taste for human blood—and for most humans, a fairy bite means insanity or death. Luckily, Annabelle Lee isn’t most humans. The hard-drinking, smart-mouthed, bicycle-riding redhead is immune to fairy venom, and able to do the dirty work most humans can’t. Including helping law enforcement— and Cane Cooper, the bayou’s sexiest detective—collect evidence when a body is discovered outside the fairy-proof barricades of her Louisiana town.But Annabelle isn’t equipped to deal with the murder of a six year-old girl or a former lover-turned-FBI snob taking an interest in the case. Suddenly her already bumpy relationship with Cane turns even rockier, and even the most trust-worthy friends become suspects. Annabelle’s life is imploding: between relationship drama, a heartbreaking murder investigation, Breeze-crazed drug runners, and a few too many rum and Cokes, Annabelle is a woman on the run—from her past, toward her future, and into the arms of a darkness waiting just for her. . . .

Annabelle being one of the rare humans that are immune to Fairy venom has the dirty job of collecting evidence from crime scenes where the police can not go. Annabelle is what I would consider an alcoholic, she takes a lot of sleeping pills while trying to escape a troubled past. While working a case an ex boyfriend who was the love of her life shows up and is now working for the FBI. She has to figure out what she feels for him but she also has her new boyfriend Cane to think about all while trying to help figure out what happened to a six year old that was found murdered.

I really enjoyed the world building, everything was extremely well explained and inventive. Although Annabelle seems pretty self destructive and the addictions get in the way of her life she was a pretty interesting heroine. Her story is well told and I ended up really liking her. The secondary characters are also well told and interesting. The plot was very creative and unique, I had no issues with getting into the story and picturing everything that was happening. I enjoyed the different take on fairies that Stacey brought to the book. I think any Urban Fantasy lover will find DEAD ON THE DELTA plenty interesting and I look forward to seeing what comes next for Annabelle.