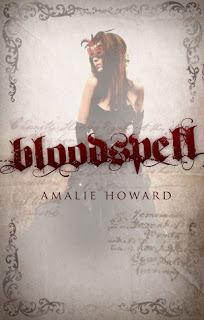 The spell was simple …

But what do you do if your blood is your enemy?

Victoria Warrick has always known she was different. An outcast at school, she is no stranger to adversity. But when she receives an old journal for her seventeenth birthday, nothing prepares her for the dark secrets it holds—much less one that reveals she’s a witch with unimaginable power.

What’s more, when she meets the dazzling but enigmatic Christian Devereux, she has no idea how much her life is about to change. Enemies will hunt her. Friends will turn on her. The terrible curse that makes her blood run black will stop at nothing to control her. And Christian has a sinister secret of his own …

Without knowing whom to trust, can Victoria survive her blood’s deadly desires? Or will she lose everything, including herself?

I really enjoyed BLOODSPELL, It was unique with a great mix of dark elements. The main character Victoria (Tori) was strong and willful. She is thrust into a world she had no idea that existed and to top it off she is more powerful then anyone could imagine but she didn't take anything sitting down and was determined to come out on the good side. Christian Devereux is an old vampire that refuses to give up his humanity. Although a relationship is forbidden between vampires and witches, Tori and Christian are drawn together from the moment they meet and fight for each other.  Every scene drew me in to the next and kept me on the edge of my seat. All the different abilities and talents were completely believable.  I'm excited to see where Amalie takes Tori next.