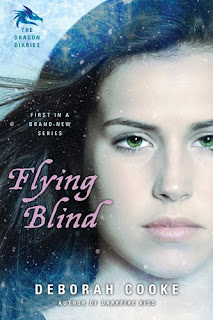 Zoë Sorensson is perfectly normal, except she's been told she's destined for great things. Zoë's the one female dragon shapeshifter of her kind. But Zoë is at the bottom of the class when it comes to being Pyr and her powers are AWOL, so she's sent to a Pyr boot camp.

Zoë quickly realizes that she has to master her powers yesterday, because the Pyr are in danger and boot camp is a trap. The Mages want to eliminate all shifters and the Pyr are next in line-unless Zoë and her friends can work together and save their own kind.

Deborah Cooke's YA novel FLYING BLIND follows the children of the characters from her Dragonfire Series with the main voice being Zoe who is the daughter of Erik who is the leader of the Pyr. If you are not familiar with the Dragonfire series don't worry, you will have no issues following along in FLYING BLIND as its a whole new series and you don't need to know any of the events of the Adult series.

Zoe has to deal with being the only female dragon (The Wyvern). Not only is she the Wyvern but her powers aren't coming to her which is causing her to double guess her self and her destiny. There is a tad bit of romance going on. Im particularly interested and looking forward to reading more about Jared. There are a lot of hints about him and Zoe having a future together and that maybe Jared knows a lot about that. He makes several comments about a future that he knows will happen so I'm very intrigued to hear more as more books come out. If you love dragon books you will have NO issues getting into this book. There is action, suspense, lots of drama and plenty of chances to read about the wonderful transformations the dragons go through. WINGING IT comes out in December 2011 and I will be grabbing myself a copy.