When I was a tiny girl, I watched Dracula on The Late, Late Show, and I got so scared, I slept with a crucifix and garlic pods. I’m not kidding. I felt safe in daylight, but I kept a stash of holy water in my bedroom drawer, just in case I ran into an immortal. For years, until I discovered boys, I thought vampires might exist, and I wasn’t taking chances.

Years later, when I was working on Acquainted With the Night, I wanted to address the myths—the blood drinking, the aversion to crosses, shape-shifting, and the inability to walk in sunlight—and give them a biological foundation.

The main character in AWTN, Caro Clifford, didn’t believe in vampires until her beloved uncle was murdered at an archeological dig site in southern Bulgaria:

One week ago, Caro’s biggest problem had been juggling her tour guiding job. Now her uncle was dead, the Kardzhali police thought she’d murdered a man, and she was stuck in a  town with (maybe, possibly) vampires and a mad (but mortal) scientist named Jude.
“Isn’t there another explanation for the blood drinking?” she asked. “Like porphyria?”
“No, it’s vampirism,” Jude said.
“I’ve been bitten once,” Caro said. “In horror movies, it takes three bites, and that’s it, you become a vampire. So I’ve got two more bites to go, and I’ll turn into a ghoul?”

“It’s not the number of bites. It’s the number of stem cells that pass from the vampire’s body into yours. And how your immune system reacts.”

Caro shuddered. Best-case scenario: Somebody was making people act like vampires, and a crazy man was trying to protect her from them.My vampires can venture outside on overcast days, but they must wear sunblock and protective gear—and they can’t stay outside for extended periods. Their immune systems are hyperactive. Their ketonin is sensitive to ultra-violet rays, and any direct exposure to the sun will cause second and third degree burns. Also, light affects the eyes; it causes corneal abrasions— even blindness.I have a BS in nursing. Years ago, I was a chemotherapy nurse. Now, I write full time, and I’ve lost my medical edge. Fortunately, I live with two scientists—a physician and a biochemist. Our dinner table conversations center around cloning, stem cells, MRSA, and H1N1. When we’re around our medical friends, the talk often turns to the future of science—and also the history of diseases. For a writer, this is great fodder for a paranormal novel.Early on, I decided that I wanted to honor the myths, but I also wanted to give them a twist. Like most predators, the vamps in AWTN have a biological edge. They are physically attractive. Their brains are more developed than a human’s—some are quite gifted with telepathy. They are physically superior. They run faster, never become ill, and heal at an extraordinary rate.Jude Barrett is a biochemist—a book nerd and vampire hunter. He’d worked at a pharmaceutical company in Yorkshire:“I harvested stem cells from mouse embryos,” he said. “The marrow is a rich site for hematopoietic stem cells. I made them grow into anything I wanted—skin, muscles, nervous tissues, livers I also induced mutations, which corrupted the genetic code. The mutated mice grew into adults. They were aggressive. Sensitive to light. Wouldn’t eat or drink—except they craved blood. The mutated mice bit the normal ones. Within hours, the bitten mice became like the others. I thought it was a virus. So I sedated the mice and took biopsies from various organs. I examined the tissues under the microscope. Nothing seemed out of order, except the specimens were loaded with stem cells.”But that’s not all. Every part of a vampire’s physiology is significant. They possess a unique hidrosis, which is the Greek word for perspiration. They emit an odor—some smell of ketones and others smell like menthol. It’s not a pheromone, but it mimics one. The odor affects a human’s brain chemistry, relaxing their muscles and generating a sense of calmness. It also has a bit of an aphrodisiac effect. This is, of course, helps them subdue their prey.Here, Jude explains it to Caro:“It’s similar to a terpene,” Jude said. “I’m sure you’ve heard of Nepetalactone?”

“That would explain the aphrodisiac effect,” Father Aeneas said.

“But my tabby was immune to catnip,” Caro said. “Uncle Nigel was always setting out little herb-filled toys for Dinah. She ignored them.”

Jude touched his nose. “Perhaps she lacked the olfactory receptor. Some felines have it, some don’t. It’s genetic.”

Caro smiled. “What does bat-nip do to humans?”

Jude’s face went slack, as if he was offended by the comment. “It depends on the concentration,” he said. “In large quantities, the molecule causes sedation and numbness, followed by euphoria and hypersensitivity.”

“But I thought a vampire’s saliva had a toxin—one that caused paralysis in its prey.” Caro wiggled her fingers, remembering how they had gone numb after she’d been bitten. “Surely I wasn’t anesthetized from breathing these souped-up ketones.”

“I agree with Caroline,” Father Aeneas said. “If the catnip theory is true, then people would faint whenever they got near a vampire. Sidewalks and train stations would be filled with paralyzed humans.”

Jude lowered his eyebrows, flashing his I’m-Not-Good-at-Explanations look. “When the chemical is excreted by a vampire’s sweat glands, it evaporates and diffuses into the air and becomes less potent,” he said, his clipped, controlled voice barely containing his passion for science. “If humans inhale it, they feel relaxed. But it’s fleeting. A high concentration of this molecule is found in a vampire’s blood and saliva. That’s why Caro was temporarily paralyzed. She was prey. And predators are made for survival. They stalk, pounce, restrain, and feed.”

“Why don’t vampires succumb to their own chemical?” Caro asked. “Why doesn’t it paralyze them?”

“Is a spider killed by its own venom? Jude lifted one eyebrow. “An effective predator isn’t harmed by its own methods of predation.”Of course, I added more to the mythology. I wanted to explain why vampires are so attractive to prey. As an example, I compared them to cone shells (Conidae are very beautiful, but they’re also toothed and impale their prey, infusing them with venom). I also explain the origin of vampirism by comparing it to the emergence of Methicillin-resistent Staphylococcus Aurea—better known as MRSA, an antibiotic-resistant bug.“I’ve been thinking of ways to explain the science of vampirism,” Jude told Caro.

A shy grin flitted across his lips, as if he were giving her a bouquet of wildflowers instead of simplified information about stem cells. She hid her smile by taking a sip of tea..

“To create a strain, all you need is a petri dish filled with staphylococcus,” Jude said. “Add penicillin. It will kill ninety-nine percent of the staph. Take the surviving one percent and culture them. You now have bacteria that are resistant to penicillin. Actually, the bacterium’s resistance is a defense mechanism. If you put the penicillin-resistant strain into a petri dish and apply erythromycin, the antibiotic will kill a majority of the bacteria. Culture the survivors, and you have an organism that’s resistant to penicillin and erythromycin. If you repeat this process ad infinitum, adding various antibiotics, you will eventually create a superior organism—one that’s resistant to all antibiotics. And it’s indestructible.”

“You’re saying vampirism evolved like MRSA?” Caro set down her teacup harder than she’d intended and it clapped against the saucer.

Piper Maitland lives on a Tennessee farm with her family. She is the author of the vampire thriller, Acquainted With the Night (Berkley/November 2011). She is currently working on the sequel, A Requiem for Daylight. Piper has also written novels under the name Michael Lee West. 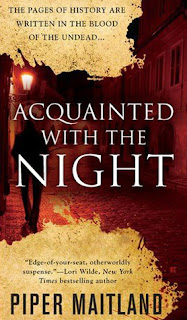 Caroline Clifford’s bland life as a London tour guide flips upside down when her beloved uncle is brutally murdered at a Bulgarian archeological site. While traveling to recover his remains, she meets a man who corresponded with her uncle. Jude Barrett is a biochemist on a mission—to eradicate the world of vampires…
At first, Caro is dismissive of Jude’s beliefs, but she can’t ignore the signs around her—the human bites on her uncle, the strange men following her, the anguished cries after sundown. Strange anagrams on her uncle’s passport lead her and Jude to a cliff-top monastery in Greece, where a shattering revelation connects a relic Caro inherited from her parents to an age-old text on immortality—and an enigmatic prophecy that pits the forces of darkness and light in a showdown that could destroy them all…

FILL OUT FORM TO ENTER