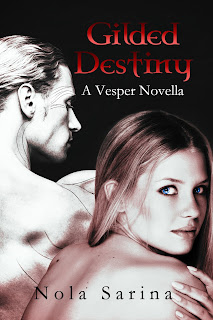 A woman’s memory returns when she falls in love with the monster who took it from her.

Nola is a mother, wife, writer, and giggle-a-holic, living in Canada and raising a pack of kids. In her spare time she can be found geocaching, guzzling coffee, or tending to her garden. Her VESPER series is on submission by her agent to publishers, along with WILD HYACINTHE, a paranormal romance co-authored with Emily Faith.