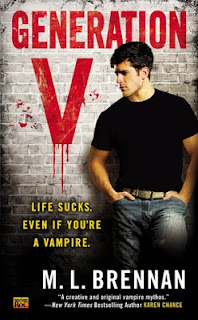 
I have not read many stories where there is a male protagonist. I don't know if it's because there are not many of them or that I just don't pick them up but GENERATION V was a character driven story with a neat take on vampires that I had a good time reading.

Fortitude starts out as a dorky, quite, uncomfortable in his own skin kinda guy. He has a "girlfriend" and roommate that walk all over him and a family that he would rather not be associated with. He works in a nasty coffee shop with a boss that treats her employees like crap. He is the youngest of his siblings and he has not yet made the transition to full vampire so he really doesn't have anything in common with them and he likes it that way. Throughout the story Fortitude grows into himself and learns to embrace who he is to save a few little girls that were kidnapped by another vampire. Suzume was a neat character. She is a Kitsune shifter hired by Fortitude's mother to protect him. She does a great job of throwing him off his game but also giving him the confidence he needs to pursue what he wants to do. She calls him out on his faults often but you can tell she cares about what happens to him no matter how hard she claims not to. There is not a romance between the two but there were a few times where some sparks can be seen.

Fortitude's family was interesting to say the least. His mother is a very old vampire that makes him come home for family dinners although she adopted him out after he was born to be raised by humans. His brother Chivalry is loving and devoted to his human wife while also killing her a little more every day. His sister hates him and would do anything to see him fail. You end up getting to know them well during the story and you will either love them or hate them.

GENERATION V was an interesting read. It managed to pull off a well-rounded story while also introducing you to everyone and everything that makes up Brennan's world. With the way things progressed I'm definitely interested in what will happen next for Fortitude. I'm not sure when book 2 will be here but I will be reading it!