Welcome to the DRAGON RISING blog blitz! I’m so excited for the release of the second novella in my brand new paranormal romance series, out from Forever Romance.

The Hidden is a series about humans with the essence of sorcerer gods, dragon gods, or fallen angels who walk the knife's edge between Miami and a hidden world of magic, passion, and danger.

I thought it would be fun to kick off the series with two intertwining novellas that feature twins. Each novella tackles one aspect of the story’s mystery while bringing in and wrapping up a romance. It was a great introduction for me, because I learned about my world while writing these stories. My twins are Dragonshifters, and I threw both of them together with a lover of a different type just to make things interesting.

DRAGON MINE kicked off the series with Kirin’s story as he joins forces with the one woman he’s loved—and the one who hates him. And while he sorts through one aspect of the mystery, his sister Lira chases a completely different lead … to a cool, aloof descendent of fallen angels who wants nothing to do with a fiery, passionate Dragon. But Archer also has something at stake in solving the mystery of her missing father, and he must reluctantly join forces with the woman who threatens to shatter his composure, expose his secrets—and capture his heart.

If you haven’t been introduced to the Hidden yet, I hope you’ll sign up to win digital copies of DRAGON MINE and DRAGON RISING. And if you aren’t one of the lucky winners, don’t worry! Both e-novellas are available for the low price of $1.99 each and are perfect for devouring together. Then look for back-to-back releases of the full-length novels that further delve into the Hidden—the danger, the passion, and the magic! [Available in both mass market and digital] 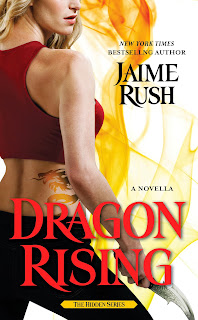 
They are the Hidden.
Not quite human. Far from normal.
And never, ever safe . . .
After her father falls victim to a serial kidnapper, cunning Dragon shifter Lyra Slade is determined to rescue him. When she discovers a clue to his disappearance that leads her to a sexy but aloof stranger, she knows she shouldn't trust him to help her, but she's run out of options.
Archer Grant, a descendant of fallen angels, is reluctant to aid the beautiful dragon because her evidence implicates his own brother . . . But when his brother also goes missing, Archer must work with Lyra to uncover the truth. But even as a supernatural desire grows between angel and dragon, they are hunted by an evil force. Faced with the deadliest of dark magick, can even love save them?

She and Archer skirted the dance floor, jam-packed with writhing, rubbing, sliding bodies. He tugged her toward a vacant spot at the bar, where undulating colors lit the thick glass. There were no available stools, just enough space for him to lean toward the female bartender and ask if she’d seen either Anika or Jeremy.

She stared at him and then shook her head. “Another Caido? Wow, this club’s getting interesting. I haven’t seen Jeremy in a few days, but Anika’s here somewhere.” She searched the crowd. “I don’t see her at the moment.”

He ordered an absinthe, then turned to Lyra. “Drink?”

Definitely not an absinthe. “Cranberry and Absolut, please, dash of Tabasco.” He raised his eyebrow at that. “Dragons have a thing for…hot and spicy.”

Did she see his mouth quirk? Probably not. Archer was anything but hot and spicy, though she wondered what was beneath the surface. She tried to pay, but he put money on the bar when the drinks arrived. He handed her the shorter glass and gripped his as he scanned the people sitting at the bar.

Lyra looked for Anika, too, but was drawn again to watch the dance floor. The sensuousness pulled at her, pulsing through her body with a song that was hard rock and electronica at once. “Firestarter,” the singer rapped, oddly appropriate to how she felt. She gulped half her drink and set it on the bar, her arm brushing Archer’s side.

She wanted to touch him. Knowing it was the Thrall didn’t quell her desire one bit. She didn’t even realize she’d begun to move to the beat until her butt brushed against him. The music was irresistible, too. She turned to him, nearly his height with her high heels, and moved close to his ear. Unfortunately, that action pressed her breasts against his chest.

“Now I know why you looked so pained about coming here. Is this what it’s like, women wanting to touch you all the time?”

He kept his gaze on the dance floor. “Everything about this is painful.”

“What is it that makes me—women—want to touch you? It’s beyond that you’re gorgeous. It’s a compulsion.”

He leaned closer, his breath warm against her ear. “It’s our energy, the essence we carry from our ancestors.”

His face was only inches from hers, the shimmer in his eyes pulling at her, making her eyes heavy.

“Are you mesmerizing me on purpose?”

“I won’t touch you. I’m stronger than your pull.”

His mouth turned up in a soft smile. 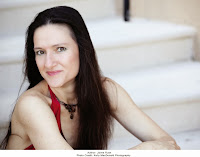