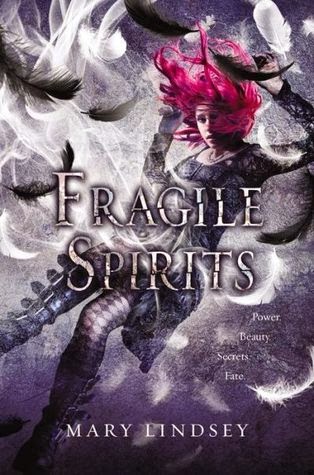 
Paul has always known he was a Protector, fated to serve a Speaker who could hear the voices of spirits lingering after death and help those souls find peace.

Vivienne ignores the voices of the dead.

Paul has always followed the Protector’s rule book, preparing diligently for the day when he’d be matched with his Speaker and fulfill his destiny.

Vivienne never does what she’s told.

So when Paul is matched with Vivienne, they both find the pairing less than satisfactory. But a kidnapping, a malevolent spirit and power stronger than both of them may just prove that they are two halves of the same whole.

In a stunning story about the beauty of fate and the power of secrets, Mary Lindsey returns to the world of Shattered Souls with a breathtaking thrill-ride of a novel.


I was pretty bummed when I saw that FRAGILE SPIRITS was not going to continue to follow Lenzi and Alden but from pretty early on you see that they are still a big part of the book and that the new main characters are pretty interesting all on their own.

Only a month has passed since the ending of SHATTERED SOULS. FRAGILE SPIRITS follows the story of rule follower Protector Paul and fly by the seat of her pants, no one tells her what to do Speaker Vivianne. One of my favorite parts of getting to know Vivienne was her attitude and how different yet similar she is to the other characters.  Both her and Paul have a hidden past and are so much more than they appear on the surface. Getting to know them was not hard to endure. I enjoyed their interaction, connection and the development of their relationship.

This series has some great secondary characters. We of course get a nice dose of Lenzi and Alden but we also see a lot of Race. Race is such a hoot. I think he needs his own book next *cough, cough*. FRAGILE SPIRITS was very much character driven. The storyline was of course interesting but the characters were its driving force.

I thought book 1 was a standalone so getting a book 2 was a great surprise. The author did end the story arc but also started some things I feel need to be in a new book so I will sit and wait patiently to see if we will get a book 3. If you enjoyed SHATTERED SOULS you will not want to miss FRAGILE SPIRITS.