UFI welcomes Lauren M. Roy Author of Night Owls. Thanks for Joining us!!

It’s set in a bookstore. One fun thing about writing urban fantasy is, you can take “write what you know” and give it a big ol’ twist. I worked in a bookstore through high school and college, so that experience definitely informed Val and Chaz as characters. And let me slip in little bits of bookseller humor while I was at it. *grin*

It has an ensemble cast. I’m a big fan of TV shows with lots of characters, all of whom bring interesting personalities and complications to the story. Think Firefly, Leverage, Game of Thrones, Community. I love watching how different combinations of people will tackle a problem. Parker and Hardison will approach a job differently than Hardison and Elliot would. Having Night Owls told from Val’s, Elly’s, and Chaz’ points of view let me not only bring together their different voices, but also opened up scenes and subplots that might not have worked as well with just one narrator.

The Creeps. Val calls them Jackals. Elly calls them Creeps. Both call them big trouble. Creeps are like the werewolves’ depraved cousins, preying on the weak. Their kind is dying out, but that doesn’t mean they’re going to go quietly. In fact, Elly has something they think might solve their population problems. And they don’t intend to ask for it nicely.

The Brotherhood. Vampires don’t get to hog all the cool toys. A society of human warlocks fights alongside the bloodsuckers against the Creeps. Most people aren’t aware that they share the world with these supernatural denizens, and the Brotherhood is perfectly content with that arrangement. They’ve charged themselves with eradicating the Creeps, whether by spell or by blade.

The supporting cast! Cavale’s been in my head as a character for a long time. I’m glad he found a home at last in Night Owls. He’s a freelance monster-hunting warlock who lives in the creepy house on the hill. Chaz can’t stand him, but I like him a lot. We also have Sunny and Lia, a succubus couple living a happy suburban life in Edgewood. Oh, and they like re-enacting scenes from classic Hollywood films – with the bonus of being able to look exactly like the actresses they’re imitating. 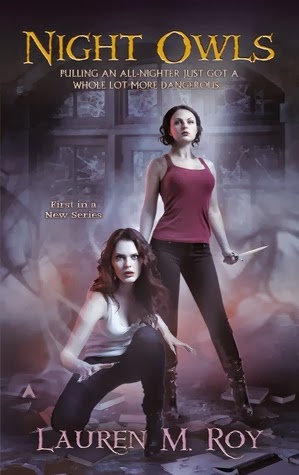 
Night Owls book store is the one spot on campus open late enough to help out even the most practiced slacker. The employees’ penchant for fighting the evil creatures of the night is just a perk…

Valerie McTeague’s business model is simple: provide the students of Edgewood College with a late-night study haven and stay as far away from the underworld conflicts of her vampire brethren as possible. She’s lived that life, and the price she paid was far too high to ever want to return.

Elly Garrett hasn’t known any life except that of fighting the supernatural werewolf-like beings known as Creeps or Jackals. But she always had her mentor and foster father by her side—until he gave his life protecting a book that the Creeps desperately want to get their hands on.

When the book gets stashed at Night Owls for safe keeping, those Val holds nearest and dearest are put in mortal peril. Now Val and Elly will have to team up, along with a mismatched crew of humans, vampires, and lesbian succubi, to stop the Jackals from getting their claws on the book and unleashing unnamed horrors…