I can consume a frightening amount of granola and yogurt.

I like going to markets and fairs, trying new restaurants, concerts, exploring new foresty places…I spend a lot of my time inside my house, writing and blogging and working, so when it’s time for leisure, I try to get away from this dang computer screen!

Revising. I love, love, love revising. It is SO much easier to me than the actual first-draft writing. I love weaving in details, discovering themes, tweaking characters, all that jazz.

I have no real writing routines, other than I aim to write at least a few times per week on my current work in progress. I spend a lot of time doing writing-related things – social media and what not – and I also blog an insane amount, so it turns out that a good portion of my day is spent in writing endeavors. However, it’s scattered and precarious. I would probably benefit from a routine, to be honest.

How would you pitch Carlos and Casey to someone who has not heard of it before?

Two ex-lovers, four years later. Is the flame still there, or has time just made things painfully awkward?

Do you have a favorite scene in Carlos and Casey?

One of my favorite parts is the beginning, where the two meet up for the first time in four years. The whole idea of awkwardness is what sparked this story. Two people who had a blazing connection in the past might not necessarily have the same connection years later. So as Casey grapples with her feelings after seeing Carlos for the first time, we see how time makes things awkward, at least in a sense of what might be appropriate or not.

My current work in progress is a romantic suspense involving a baby bounty hunter, a freak snowstorm, and lots of sexual tension between two loner leads. The leading lady, Rose, could probably take down most men, easily, and she dedicates her life to rescuing babies stolen by a rogue parent or babysitter. This book has been a blast to write, and I’m so excited to share it with the world soon!
__________________________________ 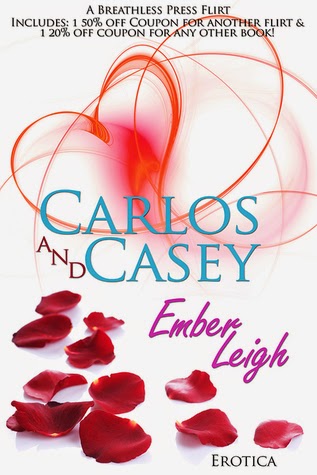 
What happens when too much time has gone by? Carlos and Casey were lovers, long ago. But in the four years they haven’t seen each other, plenty has happened — marriage, job changes, lifestyle shifts, routine, and ultimately divorce.

When a work trip brings Casey back into Carlos’ territory, she knows she’d have him right there in the airport parking lot. But Carlos doesn’t seem so eager. Unsure of herself post-divorce, Casey knows only one thing: she wants this man as much as she did the last time she saw him. And she’s more than ready to relive every saucy adventure they had together. Can the sparks be salvaged, or has time left them behind?

Her breath caught as she followed him up the staircase, tucked to the far side of the house. Carlos had always been fit enough, but it looked like he'd taken up some new form of exercise in the past four years. He was beefier, yet still lean. His ass moved round and tight in front of her as they climbed the stairs. At the landing, he gestured in front of them.

"This is my studio, but it's all yours for tonight."

It was a rec room that took up the whole second floor, and far more standard male than the ground floor alluded to. Movie posters, gaming systems, books scattered on floors and coffee tables, and, off to one side, the trumpet, asleep in a bed of sheet music. In the corner there was an overstuffed couch just about as wide as she was long – it would be great to sleep on, even better if he could bend her over that armrest and fuck her until dinner was ready.

She cleared her throat, deciding adult friendships could be fun, even after four questionable years. "I thought I'd be sharing a bed with you?" She tried to keep her tone playful as she sauntered toward the couch. She tossed him a smile and she caught a glimpse of him looking very stricken. Shit. Too far. Things are too different now. Abort!

Maybe too much time had passed in general. Maybe he was courting a girl and wanted to take it slow with her. Maybe he no longer found her attractive, four years becoming the dagger in the heart. Maybe he'd become celibate, or found her life too normal and boring. There was a whole list of reasons why she shouldn't make the first move.

"I was just joking," she said after a moment, rolling her eyes. "Come on, lighten up."

He exhaled slowly, looking down at the ground as his tongue found the corner of his mouth. "I know it was a joke, Case."

"In case you forgot, we used to share a bed." She looked at him pointedly, already horrified that the words were coming from her lips. What was the getting at? Who had authorized this dialogue?

He squeezed his eyes shut and laughed softly. "Oh, I remember."